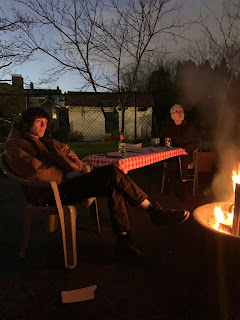 My youngest, Flynn,  and me, socially distanced in a friend's back driveway where we shared a turkey feast. Grateful for it all.

AN ANGEL AT MY TABLE 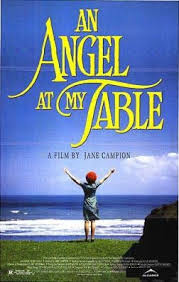 When Jane Campion's AN ANGEL AT MY TABLE came out in 1990 it knocked me out, and I raved about it to everyone as it instantly became one of my favorite films. I hadn't seen it since, until it aired tonight on TCM, and I'm happy to report it's still one of my favorites, as well as one of only a handful of great films about great writers.

The story of the New Zealand writer Janet Frame, it captures the poignancy of her life and the power in the most understated way, using the locations and fine acting to convey much of the emotional turmoil and trauma that shaped her life and writing. AN ANGEL AT MY TABLE is a work of art well worth watching.

On a perfectly clear Fall day, heading back to
Fort Monmouth, I watched as other cars on
The Garden State Parkway veered onto the
shoulder and stopped, the drivers not getting
out, just sitting there. At the toll booth the man
said The president's been shot. As I drove on,
more cars pulled off the road. I could see their
drivers weeping. Back in the barracks we stayed
in the rec room watching the black and white
TV, tension in the room like static. When they
named Lee Harvey Oswald, I watched the
black guys hold their breath, hoping that meant
redneck, not spade, and every muscle in their
faces relax when he turned out to be white.

Caught the last half of THE LAST OF THE MOHICANS last night and fell in love all over again with Madeline Stowe's and Daniel Day-Lewis's characters' romance (as well as Jodhi May's and Eric Schweig's implied romance characters). So woke up this morning thinking of some other movie character couples I fell in love with:

Veronica Lake and Alan Ladd in THE BLUE DAHLIA

Timothee Chalamet and Armie Hammer in CALL ME BY YOUR NAME

Nicole Beharie and Chadwick Boseman in 42

Andie MacDowell and Hugh Grant in FOUR WEDDINGS AND A FUNERAL

Emma Stone and Colin Firth in MAGIC IN THE MOONLIGHT

Jennifer Lopez and George Clooney in OUT OF SIGHT

Robin Wright and Cary Elwes in THE PRINCESS BRIDE

Veronica Lake and Alan Ladd in THIS GUN FOR HIRE

Cathy O'Donnell and Farley Granger in THEY LIVE BY NIGHT

Barbra Streisand and Robert Redford in THE WAY WE WERE 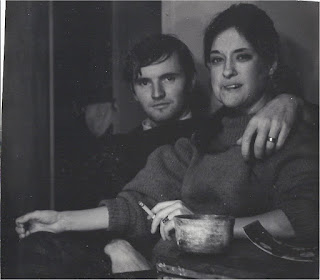 I've been thinking a lot lately of my first wife, Lee. She passed over 34 years ago after 6 years in a coma from a botched operation. So it's been 40 years since I last saw her in person. We were divorced by then. We married in August 1964 after seeing each other once in the Spring of 1961 and then only corresponding til we saw each other again three days before we got married. This is one of my favorite photos of us in the early years of our marriage, 1966, when we had settled in to a comfortable familiarity. We were 24 and 23, an old married couple. 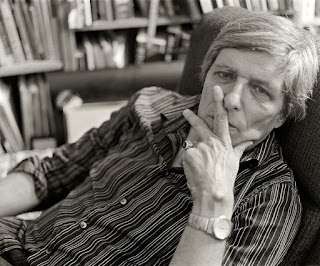 I first had contact with the poet (and novelist, publisher etc.) Lewis Warsh in the 1960s, but we became friends in the early 1970s when I was going through a (revolutionary at the time) personal and political transition to being "out" as "gay" and "queer" (though I was still attracted to and in relationships with women, it's a complicated tale) and was attracted to him.

I don't know if I ever said anything but I think he got that. He was "straight" but was always sweet to me in a way few, if any, so-called "straight" men were to me at the time. I appreciated that throughout the years that followed when I often "presented" as "straight" myself and confused others with my attempts to clarify that with my writing.

Whenever I saw him through the five decades that followed, I felt that sweetness and it made me happy. That's what I'm remembering and feeling on learning that he's passed. The last time we read together was at KGB in NYC with Dale Herd in 2015 (I think), and the last time I saw him was a few years ago and still felt that tenderness from and toward him.

He will be sorely missed by many, and my heart goes out to his children and many friends and fans.

Here's a poem of his that was in BOMB in 2013 (the lines should be closer together but I can't get them there:

Dark Side of Time

Time is the solution in which the living

and the dead confer—there’s no other place for us

or them and there’s no other place to be

(except where we are), putting our feet up

on the balcony and staring out at the empty

plain—where everything is invisible and everyone

has a name (the only way back is the way

you came), and once I played Odysseus

to her Penelope, way back when, and we stepped

from the bath in someone else’s house,

and once all the lights went out in the middle

of the night and we built a fire until the storm

abated, and later—it’s getting late in the day—

we’ll have caviar and champagne—at the edge

of the crater on the Sea of Dreams,

and look down to earth as if it was all one

and the same, and leave our footprints

Email ThisBlogThis!Share to TwitterShare to FacebookShare to Pinterest
Older Posts Home
Subscribe to: Posts (Atom)
To respond to a post, just hit "comments" at the end and feel free to wail. [But no cursing people out or telling lies about them.] Or comment on Facebook where my blog posts are reposted.