RAY DIPALMA: THE ANCIENT USE OF STONE 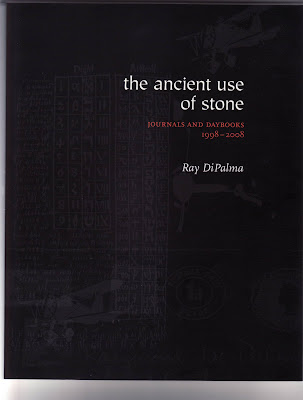 The subtitle of my old friend poet Ray DiPalma’s latest book is: JOURNALS AND DAYBOOKS 1998-2008. But don’t expect anything like a typical journal, or daybook for that matter.

As always, Ray’s work is not only challenging on many levels, but uniquely so. The best way to approach it, from my perspective, is as a work of art, or series of works of art.

And this book certainly is a work of art, even just as an object itself. (It's one of the initial offerings of a fairly new imprint from L.A.: Otis Books/Seismicity Editions.) DiPalma’s been fortunate in that many of his books (and he’s published more than me I believe, which means his count is probably up in the thirties) have been beautifully produced, so much so that even if you never read them you’d love to have them on your shelves.

Plus, Ray himself is an artist, who has produced books—some one of a kind—made up entirely of his “stamp” works: collages and art works made from ink stamps, often antiques, of generic figures and scenes.

I have a little, fold-out-book-like object called “Shivering Polar Bears” in which a figure of a polar bear is stamped twice in the same spot just altering the outline slightly so it looks like the bear is shivering, and then this procedure is done again several times the length of what is maybe a 2” by 16” folded piece of paper as it unfolds, and all on a beautiful bluish gray paper that is speckled with other colors on the other side. Lovely. And unique.

I also have a larger framed work of Ray’s in which he uses two fair-sized pieces of a soft beige art paper (maybe twelve by sixteen) to stamp many copies of a man’s head c. 1930s on one and a woman’s, same era, on the other, repeated in rows that begin at the right margin and then curve slightly down to the left, and each row diminishes in number from the upper right hand of the paper to the lower right hand corner (so that by the bottom there’s only one left in that row) giving the effect of the heads falling, or toppling over, or in mid-topple.

Like a lot of Ray’s writing, it seems to imply a lot more than the simple combination of symbols or figures initially might superficially mean. There is whimsy and a sense of playfulness on the surface, but at the same time something much more deeply serious and even, perhaps, threatening.

So too these journals and daybooks. There are some entries that are about as personal as Ray’s writing gets, more so than any I can remember actually, But the bulk of the writing in this book is more concerned with larger and/or more minute concerns than the personal.

Even the intellect behind them is much broader than the personal, except in the act of selection (and who knows how much that may have been determined by chance no matter how arbitrarily conferred on the material by Ray) because so much of the written material here seems taken from other sources: his reading that day, or memory, or as I say some arbitrary chance method of selection like randomly opening a book and dropping your finger to the page (not saying this is what he does, just that the juxtaposition of bits of writing from obviously different eras and authors suggest some randomness at times).

Or, as he puts it himself in an entry for March 5th of his “Jihadgraphy” journal:

(That "to" should be italicized but I can't figure out how to do it on the initial blog composition page!)

Or this from March 27th of the same journal:

“Meditative, unintelligible, beyond
the tides”

Or his made up words that resonate in ways beyond the obvious, like “choruspondence” etc.

Or the more personal entries that sometimes are obviously coming from Ray and his daily experiences and sometimes might actually be coming from the voice of another, though may resonate with Ray’s own, like this first stanza from August 1, 2005 in “An August Daybook”:

“I move more slowly now
because there is no one to go with me.
Once again the contrarian has reclaimed
a part of my temperament and demeanor—
back again, back again as always”

I remember the influence Beckett had on Ray, at least the way I saw it when we were both at the U. of Iowa Writer’s Workshop where we first became friends and I saw Ray perform on stage the lead in KRAPP’S LAST TAPE (in which he was excellent, decades later he was one of four actors in a play of mine at a poet’s festival in NYC and once again amazed me with his skills as a stage actor) which may be why I hear the resonance of Beckett’s voice in those lines above. 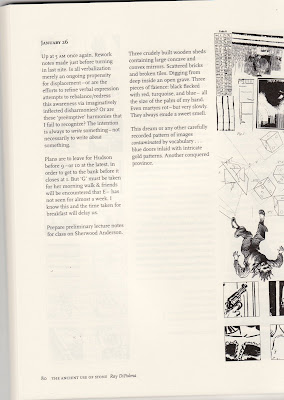 Maybe the best way to illustrate some of the many things he is doing with language and composition is to show you a page from the “Jihadgraphy” section (one of the most compelling of the journals because it includes Ray’s artwork in the margins of many of the pages, although in my scanning of this particular page some of the artwork gets cut off because I didn’t want to damage the binding to fit the page in the scanner, but it gives you an idea, especially if you click on it to enlarge it and read the text).

I could go on, but the main point I want to make is that if you treat each page of this book like a painting or sculpture in a gallery or museum and take the time to absorb what engages you initially, just on the surface, and then stick around to let deeper meanings or resonances sink in, I think you’ll be well rewarded. But even if you find the work at times too difficult to comprehend in any way that you’re used to or prefer, I think Ray wouldn’t mind if you skipped around and found pieces here and there that might better speak to you and then expand from those to explore the other multiple possibilities in Ray’s technique(s).

I’ll leave you with one more quote from the text, this one from the journal titled “Mules at the Wake” for July 18, 2006, that, to my mind, best encapsulates what Ray is doing in this book:

“Wet ink drying on the eyelids—
Ensorcelled mazes
Minimal insight plethoral possibility
A catalogue of the haphazard and abortive
Radical trajectories
A capacity for mutation at cross-purposes
The path of the misanthrope and panther”
Posted by Lally at 3:17 PM

Michael, thanks for posting this - I will order a copy this weekend.

okay - i'm sufficiently teased - not that i need anything more than the 'lally endorsement' - but the simple elegance of the cover, the loving descriptions, and the scanned page peak my curiosity ...
but i do need to know - is the textbook-like appearance of what seems to be pretty non traditional content part of ray's intent - or - is that an editor's decision - interesting ...
when i think of the way kerouac envisaged his publications, and i notice that mr. dipalma 'made' books, i wonder if the author controls the appearance in today's market ...
looking forward to the experience ...

for fame and fortune and sex!

instead of dropping/changing the word

I used the word in it s gerundal form and wrote her:

"just drop the entire fucking poem... you're a moron."

and yet, sometimes the historical imperative to document supersedes the ego ...
compromise, collaboration, etc ... for a higher ideal - art ...
the curiosity remains legitimate ...