Waked my friend Tony tonight and on first glance walking into O'Boyle's funeral home in Bloomfield New Jersey (you could tell it was Jersey because the funeral home is right next door to a diner) it could have been any wake I've been going to since I was a baby. The Irish side of his family could have been relatives of mine, and the Italian side relatives of half the neighbors I grew up with and my second oldest brother's in-laws as well. (And plenty of other ethnicities too)

But what was different was—no coffin. Tony was a Buddhist, a Dharma Punk Buddhist, and had let his wife and others know how he wanted his life celebrated. So there were lots of photos of Tony looking like Tony including the first shot of him as a baby lifting his head. They were on magnetized bulletin boards and in a computer screen slide show and in photo albums passed round. Couldn't have missed who he was from the start. And there was a wire thing holding up a tee shirt he loved to wear that says TATTOOS SOLVE EVERYTHING.

A lot of people from all of Tony's worlds showed up, so many that the line to give condolences to his mother and father and sister and brother and wife snaked out the door of the room, a big one, and stayed that way for the three hours I was there. So sweet to see so much love for the family to feel. The group of friends I was part of made a particularly strong showing, which made me feel happy to know such loving souls.

Tomorrow some Buddhist monks will do some chanting in the same room of the funeral home, and some of us will say a few words, and hopefully some will make us laugh, the way Tony always laughed. One of my great pleasures in life was getting Tony to laugh. His joy was so pure and unconditional. May his spirit forever rest in the hearts of those who knew and loved him. 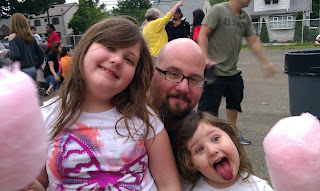 [Tony with his daughters, last summer I'd guess]

When I walked into the funeral home and saw his "Tattoos Solve Everything" t-shirt, it brought such a huge smile to my face. <3

I found your blog by doing a search for that exact shirt today... I really do feel I need one. Tony was an amazing friend and the only way for me, personally, to honor him is to pay it forward, he'd dig that!

Yes he would, just as I'm sure he dug getting all us Jersey Irish and Italians (and the spattering of other ethnicities and so-called "races") bowing and chanting along to his Buddhist funeral! I could hear him laughing about that.