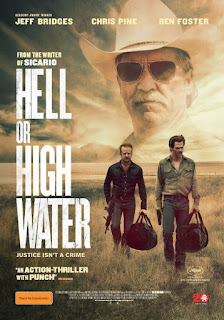 I've seen a lot of good movies this year, some even great movies, but few if any were "perfect." HELL OR HIGH WATER is, for this viewer, a perfect movie. Even if it's more or less a caper movie (with enough mystery, along with the requisite tension, written into it by Taylor Sheridan to keep an audience interested) but it so transcends mere genre to become a work of art.

Chris Pine I knew was a competent actor, though more known for his pretty eyes than his acting skills. This movie puts that latter idea to rest. Maybe credit has to go to the director, David Mackenzie, because everyone in HELL OR HIGH WATER is at the top of their game, acting-wise. Pine deserves a nomination for my taste, as do Ben Foster and Jeff Bridges. Damn can Bridges bring another level of reality to all his characters.

I'd be giving something away if I even referred to the story line. But I can praise all the artistry of this flick from the cinematography to the soundtrack. I highly, sincerely, completely recommend you see it, and in a theater or on the largest screen you can find because every shot is a work of art, and the close ups of the acting are overwhelmingly rewarding.

If you're old enough to remember how you felt after you came out of seeing BONNIE AND CLYDE or BUTCH CASSIDY AND THE SUNDANCE KID when they first came out in theaters, well, I felt the same way after seeing HELL OR HIGH WATER as I did after seeing them. Go see for yourself.
Posted by Lally at 10:09 PM

Michael,
I loved it, also. Think of Jeff Bridges as a young man in "The Last Picture Show" & Ben Johnson played the old guy. Now, Bridges is the old guy. What a career he's had. What a performance! I've seen it twice.
Harry N.

I hear ya Harry. When the film credits were over and the screen went black I said to the friend I saw it with, "I could watch that whole movie again right now." And I was thinking the same thing about Bridges you were, from LAST PICTURE SHOW to this, could be the same character grown old...his physicality is always so perfect for the character it's almost beyond acting or at least what most actors do or are capable of...