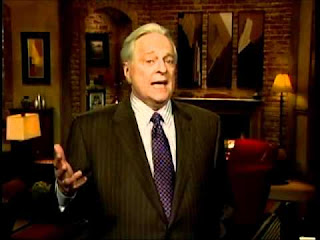 I never met Robert Osborne, but I feel like I knew him just from watching him introduce movies on TCM for decades. He was so genial and likable while sharing his knowledge of the details, large and small, of the making of the movies he introduced, and then added a coda to, that I wished I could spend time with him personally, sharing movie stories and movie love.

In a way I felt like I did know him, just from his TV presence, which says a lot about his ability to communicate to his audience of classic-movie lovers, like me. And I liked him, too, because he was so committed to preserving the movies of the so-called "golden age" of the 1930s and '40s (as well as other decades), movies that I grew up on, either seeing them in theaters when I was a boy, or on TV when that device entered my world.

It was obvious he was ailing, from the ways he aged on camera and then hosted fewer and fewer movies over the past few years. So I was already missing him before the news broke today of his death (this my be the most thorough obituary, from Variety).

He was eighty-four and lived, it seemed, a life he loved and felt fulfilled by. What more can we ask? He will be sorely missed by his family and friends and fans, including me.
Posted by Lally at 5:36 PM