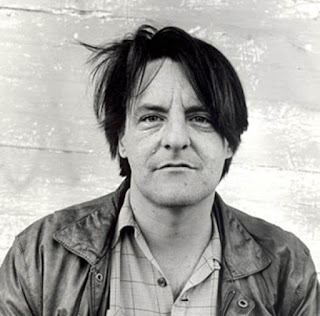 I got this photo off the Internet and am sorry I don't know who took it. I was looking for an image of Kevin from around the time we met and couldn't find one; this was the youngest version of him I could find (at least on Google). We knew each other in the 1970s through the mail and mutual friends, especially the late poet Tim Dlugos who was one of my closest friends from the day we met until the day he died from the AIDs plague.

Perhaps the first time Kevin and I met was when we, and Tim, read at Stonybrook on Long Island in March of 1980 (which I know because on the ride back to Manhattan in Tim's car Tim interviewed me for Little Caesar magazine (issue 11) and mentions it in the intro to the interview. We saw each other over the years and perhaps read together again, Kevin and I, and he contacted me not that long ago about hopefully seeing me soon, despite the reality that he was sick and that was unlikely.

He was a generous, open poet whose personality and work had a big and widespread impact on all those who encountered either. The outpouring of grief from so many of us demonstrates that. My heart goes out to Dodie and to his many friends and fans.
Posted by Lally at 12:01 PM