ONCE UPON A TIME IN...HOLLYWOOD 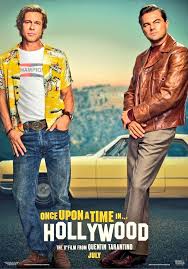 His latest is no exception, and its length can be attributed to all the cinematic frills (he loves to romance a new camera angle or character quirk etc.). Some friends of mine hate all that, find it superficial or even amateurish. But the success of his better attempts kind of gives the lie to that.

The guy knows movies, or at least the genres he's enamored with, but he also knows the movie business. And this flick's main subject is the main business of Hollywood: movies and TV and the stars who emerge from them. Like the fictional ex-TV star DiCaprio plays. I often feel DiCaprio is miscast, and that was my first response here, but his performance grew on me and I ended up suspending judgment and even identifying to some extent (I was never a TV or movie star but I starred in a few movies and one short-circuited TV show).

The rest of the cast was, as often with Tarantino, really terrific, with lots of actors getting a chance, whether brief or extended, to show their stuff. Like the totally fun to watch work of Margaret Qualley in the role of a young hippie girl follower of Charles Manson, to the few but perfectly rendered lines of Damien Lewis (who usually doesn't appeal to me) as a surprisingly believable Steve McQueen,

The usual Tarantino gratuitous violence that I generally despise, is thankfully limited to basically one scene, a bit of which I had to tun my eyes away from. But otherwise he captures the self-indulgence of much of movie-making both through the characters and in his own writing and directing. I can see why some friends hated it and others loved it. I mostly was emotionally indifferent (par for a Tarantino movie for me) until the contrived ahistorical ending that left me unexpectedly touched.
Posted by Lally at 4:58 PM