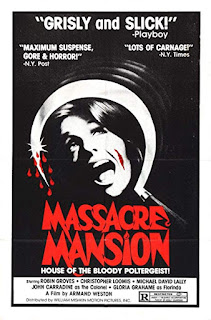 First movie I was in as a member of The Screen Actors Guild, so had to add my middle name David because there was already another Michael Lally in SAG. It was also the last movie Gloria Grahame was in before she died, and one of John Carradine's last. 1981. Originally called THE NESTING but I found this poster with this different name online. It's in a few cult classics books.
Posted by Lally at 11:35 PM