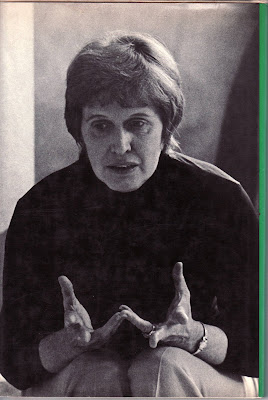 Ann Darr was a wonderful poet and great friend to me when I lived in DC in the early 1970s. I was saddened to read of her death on poet E. Ethelbert Miller's blog, and reprint her obituary below. She was one of the most impressive people I've known in a lifetime of impressive people. I feel fortunate to have been her friend. There's a short poem of hers quoted in full in the obituary (though not with the original line breaks) but I'd like to quote another here:

When I start to write
the formula for living
on the board, it's not
that the chalk crumbles,
but that my hand
disappears.

Ann was born in Bagley, Iowa in 1920, graduated from the University of Iowa in 1941, worked for NBC radio in New York, and was one of the first women military pilots to serve in WWII as a Women’s Air Service Pilot (WASP).

While with NBC radio in 1942 Ann was a writer and broadcaster for The Woman of Tomorrow. As a WWII pilot Ann was stationed in Sweetwater, Texas. Over 25,000 women signed up to join the WASPs and only 1074 earned wings. The WASPs flew over 60 million miles in every aircraft the Air Force had: small trainers, B-26s, B-17s, UC-78s, P-51 fighters, and the B-29 Super Fortress. By the time the WASPs were disbanded on December 20, 1944, 38 of the pilots died in airplane crashes.

The first B-29 flight by the WASP’s was to show men who balked at flying it that this was a plane “even women could fly.”

Ann was a prolific writer and author of eight books of poetry: Flying the Zuni Mountains, St. Ann’s Gut, The Myth of a Woman’s Fist, Riding With the Fireworks, Cleared for Landing, Do You Take This Woman, The Twelve Pound Cigarette, and Confessions of a Skewed Romantic.

Ann’s poetry readings criss crossed the world from the Kennedy Center in Washington, D.C. to Prague, Czechoslovakia. She taught creative writing up until the age of 80 at American University in Washington, D.C., the Writer’s Center in Bethesda, MD, and other universities throughout the country.

She raised her family with her husband, George in Chevy Chase, MD.
In commemoration of the WWII Memorial Ann wrote an article for The New York Times Magazine, May 7, 1995, The Women Who Flew—but Kept Silent and for U.S. News and World Reports: The Long Flight Home: Women Served and Died in WWII. Now they are remembered.

While in her 70’s Ann toured Western Europe with other artists, writers, and musicians as a member of Point-Counter Point. This artistic troupe would float from city to city on a large river barge, dock, and then put on a day of cultural exchange with the local citizens. Ann once wrote to a friend what she wanted to appear on her tombstone: Late in life she ran away from home and joined the circus.

Ann was stricken with Alzheimers and lived in nursing homes near her daughters in Portsmouth, New Hampshire and Chicago, Illinois over the past six years. Ann is survived by her three daughters: Dr. Elizabeth Darr, Worcester, MA, Deborah Darr (Kevin Shanley), Chicago, IL, and Shannon Darr-Longstaff, Eliot, ME.; grandchildren: Judson Lester, Vera Lester, Travis Longstaff, Taygra Longstaff, and many other great friends and relatives.