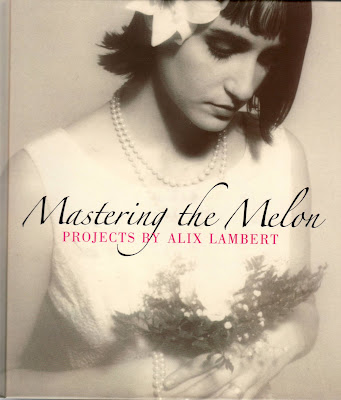 One of many books I missed on my "three-word title" list a while back. I hadn't seen MASTERING THE MELON yet. Subtitled PROJECTS BY ALIX LAMBERT, this is an art book highlighting exactly that. Art projects might be a better term, but they would be difficult to categorize in any familiar way, or even unfamiliar.

Lambert's art is whatever she takes an interest in, and the projects are anything from making a film about it (THE MARK OF CAIN, a 1999-2000 documentary on prison tattoos in Russian prisons) to marrying and divorcing four different people in less than a year (three men and a woman, though the woman was "only" a legal domestic partnership agreement, 1992-93) as an exploration partly of how easy it was or not to do, and of a lot else subtle and not so.

They also go from using her physical presence, including having a miniturist paint her image on surfaces as small as a fingernail cutting or piece of rice (the exihibition left many viewers bewildered on discovering what they took for an empty gallery, not spying the pin stuck in an otherwise empty white wall with Lambert's image painted on its head) or shaving her head to duplicate "Male Pattern Baldness" and photographing the results in suit and tie with a basketball, looking like John Waters playing his idea of a basketball coach, only more intrusive, more disturbingly confusing and obvious at the same time, and then pushing it further by completely shaving her head and drawing lines on it to look precisely like a basketball, to projects in which she isn't even involved, except as organizer or generator, as in an exhibit of paintings produced in answer to an invitation from her to various painters to follow the instructions on a tape by Bob Ross of the TV show "The Joy of Painting" (she sent canvas with the instructional tape as well).

There's a lot more, all of it uniquely different than the rest. I've mentioned Lambert before in posts, mostly as a poet and a filmmaker, but her creativity is so much vaster and braver and more unique than whatever those words imply, it's impossible to, as I said, catergorize.

All I can really say is, her work has made her one of my new favorite artists as well as one of my heroes. I not only relate entirely to her sensibility and the broadness of her interests and the courage with which she pursues them, but also with the refusal to limit her creativity and intellectual and aesthetic curiosity to any one, or even two, or even ten, "art forms" or approaches [which is not to say that any kind of artist or writer, etc. who does stick to one particular method or approach or genre or form or etc. can't be equally as brave and unique, of course, but being one who has branched out in ways that have often confused and even alienated those who may have dug an earlier aspect of my creative activity, I'm senstitive to the "spread yourself to thin" critique].

Great to read such an enthusiastic and nuanced response to Alix's work. And she certainly is worthy of the hero mantle on a number of tips.

It is worth understanding that, for the same reason many of us are excited, some become confused.