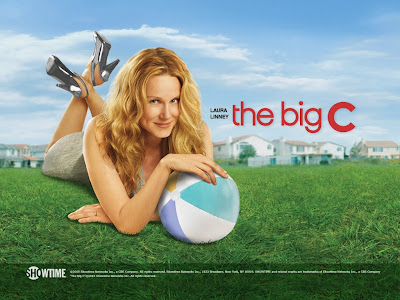 Caught the opening episode of this new Showtime series last night starring Laura Linney and found it worth watching.

The story—as you've probably heard from the publicity blitz promoting it, so I'm not giving anything away—is about a woman who gets diagnosed with incurable cancer. It follows the old movie and TV cliche as she throws caution to the wind etc. and sets out to make the most of the time she has left.

What saves the old story line from becoming just another rewrite is first of all Laura Linney. I'm not always crazy about her choices as an actor and the ways she develops them in the roles she takes, but I am always impressed by her acting chops and she's in total control of them in THE BIG C. It is her show, no doubt about it.

The other actors are all up to the game as well, including Oliver Platt as her husband (why do all these doughy overweight guys who aren't that attractive always end up on TV and in movies these days with svelte attractive blond wives?) and Gabourey Sidibe who was so amazing in PRECIOUS (and where are the critics and others who predicted she would never work again after that film because of her "look"—i.e. her weight etc.?).

But maybe what works most, at least for me, is the Capra-esque (can't remember if that's the way you spell that) quality of the story line. Something I haven't seen in a long time, maybe decades. It's like everyone's a character, eccentric, peculiar, over-the-top or under the bottom etc. and unexpected and highly unrealistic things happen all the time.

But that's what made it worth watching, along with the acting. Yes aspects of what I'm identifying with Capra films from the '30s and '40s have been refashioned in many independent movies of recent years (usually starring Michael Cera) but they've always had an ironic distancing (at least until the usually happy resolution) that Capra didn't have, nor, to my mind, does THE BIG C. It's sincere from start to...well, we'll see.

On a personal note, having been faced, no matter how briefly, with illnesses that may have been death sentences in the shorter term, I've experienced at least some of what the Linney character does in this show (kudos to writer Darlene Hunt) and must say, some of her responses echo mine, whether I expressed them at the time or not. So in that way, there is an underlying element of realism to the show that is also satisfying, at least to me.
Posted by Lally at 2:51 PM