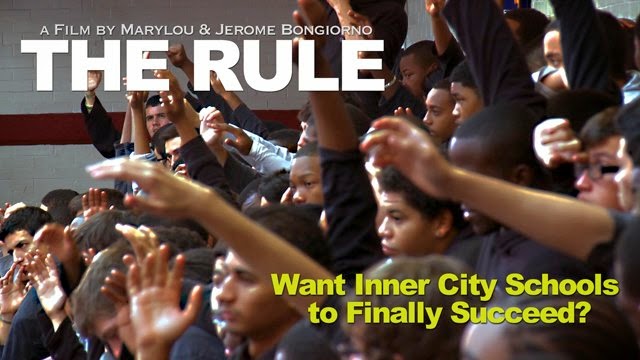 Caught this PBS documentary, THE RULE, last night about the high school—St. Benedict's Prep—I went to in Newark NJ back in the 1950s. The doc gives a quick history of the school, including a brief reference to the German and Irish immigrant battles that took place in the neighborhood in the 1800s when my maternal grandmother went to grammar school in a building later acquired by St. Benedict's, and her grandfather took part in those battles where the German butchers used heir knives in what was called in the papers back then "race wars" (because the White Anglo-Saxon Protestant establishment saw the immigrants as different races) and an equally brief reference to the way the school was a day school for the sons of working-class immigrants from Germany and Ireland at first, then later from Italy and Eastern Europe too, as it was when I went there, with also a handful of African-Americans and Asian-Americans and a handful more of Latinos.

But after the urban disturbance of the late 1960s—called by some "the Newark Riots," and by others "The Newark Uprising" and other variations—the Benedictine Monks that ran the school, and lived in the abbey attached to it, split over whether to close down, move, or stay to serve the new community that took over after the late '60s: i.e. the "black" community.

When I went there from 1956 to 1960, St. Benedict's stood between an entirely "black" neighborhood of wooden row houses covered in asphalt shingles made to look like fake bricks, which ended basically across the street from the school, and the downtown Newark business area which began right behind the school with famous (to us) stores like Bamberger's and Klein's-On-The-Square, (where my mother took me and my brothers and sisters to get our Easter outfits), as well as movie theaters and burlesque theaters (New York City had banned burlesque houses for a while in the repressive and oppressive 1950s, so Minsky's and the other places moved to Newark for several years). The downtown area was predominantly "white" when I was at St. Benedict's, but after the Uprising became predominantly "black."

In the uprising, the row houses all burned down in the neighborhood where I got to see Daddy Grace sitting on his thrown in an ermine cape with nails longer than I'd ever seen before and a brass band that killed (the only white, let alone kid, in the place) or ate at Father Divine's Peace restaurant, and later dated a girl from the neighborhood, a couple actually, before I left Jersey for the military when I was nineteen, years before the uprising. Now where once there was a "ghetto" has a branch of Rutgers University as well as a government funded "middle-class" enclave of houses with grass and trees, though that didn't stop three African-American students home from college and hanging out in a playground that's part of the complex from being shot to death by some Puerto Rican teens a few years ago...

...anyway, this documentary mentions some of this in passing but mostly concentrates on how a small band of Benedictine monks, including a classmate of mine from the '50s, broke from the rest in their abbey, who all left, and instead stayed and decided to make educating urban teenage boys, mostly "of color," their mission, and after raising funds from an intensely active and committed alumni even added a dormitory for boys whose homes were just too hectic or dangerous, or their particular neighborhoods in Newark were, so that they could learn and grow in a safe and supportive environment.

It's a pretty quick-moving [and moving] and pretty hard-hitting [and at times hard] film, with boys and monks starring as caring and determined realists, despite the spiritual setting and atmosphere. I have to say, it made me proud (and also left me wishing when I was there they'd had some of the innovations the monks introduced in more recent times...)

[PS: My experience at the school wasn't great because in the years I was there it was only focused on academics (to prepare for college and a specific career, like for me engineering because I was great at math and science but not at languages, including English, at least the way they wanted it done) and sports (I played on the football team for a few years) and mostly ignored the creative arts I was already involved in and determined to pursue as my life's work, and also a lot of the students then were racist, like the rest of "white" society, so it's almost ironic that after the Uprising it became a school that fights racism—through education—and promotes the arts, especially those culturally relevant to "black" and "brown" cultures, etc....]
Posted by Lally at 4:28 PM