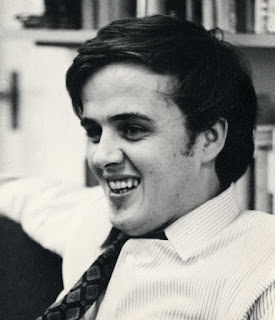 This is what poet James Tate looked like when I met him at the University of Iowa in 1967. He was only a year-and-a-half younger than I was at the time, but he seemed like a kid to me. I had just spent four years in the military, was married already and soon with a kid on the way.

He was a graduate student who would soon, or had just, I can't remember any more, win/won The Yale Younger Poets Award for his book LOST PILOT. The title poem about his father who'd died in action toward the end of WWII when Tate was an infant.

I didn't know much more than that about him when we met and assumed by his style he was some kind of prepster but I liked him. We met through the poet Nathan Whiting who was younger than both of us and an undergraduate student at Iowa, which I was too.

I had arrived in the Fall of 1966 a few days before the semester began to try and get into the famous Writers Workshop (the original one—of which at the time there were still only a few scattered around the country) with no undergraduate degree so had to take undergraduate courses first (I quickly talked the administration into letting me work on a BA and MFA at the same time, a first for them) and Nathan talked me into taking an undergraduate poetry workshop that Tate, who was a graduate student in the Writers Workshop, was teaching.

Tate said he liked my work but that it would't "win any prizes" and would be tough to get published because it was too raw (for those times). I liked him and was happy for him that he won that Yale prize (for a book that was much less "surreal" than his work later began being called) but my approach was different and he was right, initially (and even since for the most part) was/is not always appreciated by the mainstream or academic publishers and prize givers.

I only saw him once or twice since those years, and continued to be happy for his success, though truth be told, and that's mainly what I struggle with in my attempts to approach whatever truth is real, at least for me, I wasn't always crazy about his poetry. I just liked him. And I was pretty sure he felt the same way about me.

Here's a poem of Tate's that is more accessible and clear than some, but full of the deep underlying sadness in much of his work despite the often seeming comic absurdity on the surface.

The blue booby lives
on the bare rocks
of Galápagos
and fears nothing.
It is a simple life:
they live on fish,
and there are few predators.
Also, the males do not
make fools of themselves
chasing after the young
ladies. Rather,
they gather the blue
objects of the world
and construct from them

a nest—an occasional
Gaulois package,
a string of beads,
a piece of cloth from
a sailor’s suit. This
replaces the need for
dazzling plumage;
in fact, in the past
fifty million years
the male has grown
considerably duller,
nor can he sing well.
The female, though,

asks little of him—
the blue satisfies her
completely, has
a magical effect
on her. When she returns
from her day of
gossip and shopping,
she sees he has found her
a new shred of blue foil:
for this she rewards him
with her dark body,
the stars turn slowly
in the blue foil beside them
like the eyes of a mild savior.
Posted by Lally at 10:34 AM