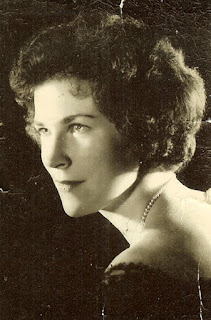 I grew up on a street locally known as "Lally's Alley" because there were so many of us on our block-and-a-half long street. I had cousins next door and cousins down the street who lived with their parents and all of our Irish immigrant grandparents.

Our ages stretched over a few decades and we were closest to the ones closest to our own age within three or four years, and that included my cousin Mickie.  She was the great beauty of the clan, winning a beauty contest when she was thirteen (at least that's the age I remember but she may have been a bit older).

She had the most perfect fair Irish porcelain skin and dark hair and eyes that lit up any room she was in. As you can see, I adored her. She was four years older or so, and quiet and gentle and modest. Unlike me. So it wasn't like we hung out or anything other than at family stuff. But in our large clan there was a lot of family stuff, and we were in and out of each other's houses all the time.

She married an equally modest and kind person, John Queenan, and they had four children and eventually, so far, eight grandchildren. She was a writer too and a good one, but hardly as brash and "transgressive" as her younger cousin up the street. But I admired her all my life and was happy to get to spend some time with her at the last family reunion.

Now she has passed on after a tough time of illness so she is free from that and at peace. But her spirit lives on in the hearts of all who knew her.

[PS: One of my first books was a slim little chapbook called THE SOUTH ORANGE SONNETS in which I wrote about the old neighborhood and created a collage from old photos for the back of the book that I never got back from the printer who shortly after publication went out of business. And since I don't know how to crop it or zoom in on Mickie, she's at the top in the middle, posing, back when she was thirteen.] 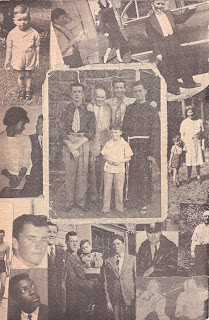 I'm really sorry to hear this. She sounds terrific. It's all too surreal, too hard to take in, all the dying.

yes it is...out of seven born and six who grew up only one sister and me left, of my four cousins next door, three left, of my two down the street, one, all our grandparents and parents gone, and some in the next generation as well...why I write really, to somehow hold all that at bay by remembering as much as I can and recording it...

Beautiful tribute, Michael. Loved hearing a little about your life growing up with your cousin, the bigger "Lally Street" picture, and a sense of who your cousin was to you...yes, may she rest in peace, and live on in all your hearts. - Tommy Nichols

That's true- it is surreal even when it's expected due to an illness. And I do believe in the spirit but oh how I miss being able to talk to them- or just hearing the sound of their voices. Probably why I love old movies so much-
And your memory and writing are treasures for sure Michael.

thanks Jen...I hope you know how much I appreciate your kind words, always...