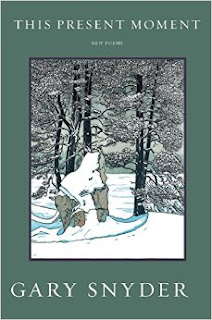 I began writing poetry as soon as I learned to write (there's a poem in my archives written to my mother when I was five in 1947), started sending poems to magazines in my teens (in the 1950s) and began publishing my poems in my late teens (the early '60s). One of the poets who influenced me at that time was Gary Snyder. I met him when I handset the original Windhover Press fine printed book REGARDING WAVE in 1969 (later published by New Directions from that version).

I have almost never been disappointed in Snyder's writing, and in the 1960s, especially, admired everything he wrote. That still holds true today, after reading this latest Snyder collection, THIS PRESENT MOMENT. Now in his eighties, and one of the last of his generation of poets to still be around, if not the actual last, this book is a fitting coda to his writing and poetry career.

Like an old athlete who doesn't have as many moves anymore as the young one, but can achieve the same results with those fewer moves, because he has the experience and expertise, THIS PRESENT MOMENT is a tribute to Snyder's poetic skills as much as any previous book. Here's just one example from it:

Young David in Florence, Before the Kill


Michelangelo’s David’s not a warrior,
not just a clever boy—he’s a cool young man.
Weight on the right leg, eyes left
brow crinkled, calculating, estimating
the text says Goliath is already down.

Left arm to his left shoulder and the stone-pouch,
right hand down at his side,
holds the ends
long leather sling straps—he has not
thrown it yet. Stands still, in a deep place
a hinge in time

Yes! That is a very cool poem. Spare & witty & wise. I jumped here from Facebook, but, I have to admit, that I didn't initially get that your references to "faux book" were to Facebook. What are you, some kind of old crank?

I just want to point out: I am not a robot.

Michael,
Thanks for the excellent review. I am going to get that book. Snyder would be my choice for U.S. Poet Laureate.
I love his poetry.
Harry Northup

agree Harry, and tpw, now you tell me