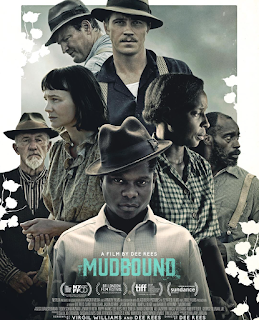 Finally watched MUDBOUND on Netflix, wish I'd been able to see it on the big screen. The cinematographer, Rachel Morrison, is making history for being the first female nominated for an Oscar in that job, and she deserves the nomination. The buzz the film has gotten as a work of art and the nominations for best adapted screenplay for director Dee Rees and co-writer Virgil Williams, and Mary J. Blige as Best Supporting Actress, is understandable.

The novel it's based on is by Hilary Johnson, and I assume the interior monologue voiceovers used for some of the lead characters in the film are directly from her book. They definitely help elevate the language and story points of the film. And all the acting is excellent, with a few surprises. Rob Morgan as the patriarch of the "black" family and husband to Blige's character is extraordinary, and should have been nominated for some awards himself.

Jason Mitchell as his son who experiences a different world and way of life (from the family's Southern farm and sharecropper roots) as a tank sergeant in WWII, I didn't even realize was the same actor who played Eazy-E so perfectly in STRAIGHT OUT OF COMPTON. I thought Mitchell was a new discovery, or from England. But I felt a few of the other actors, though they did excellent work, were a bit miscast, especially Garrett Hedland.

He plays the younger brother in the "white" family, who goes off to war and returns with a different perspective as well, especially about race, but is still faced with his bigot grandfather and indifferent-at-best big brother. Hedland kept reminding me of Val Kilmer as Doc Holiday, where he used an odd way of speaking that made his words seem like they were being tasted and eaten rather than spoken. Maybe it's just me, but I had a hard time accepting Hedland as the character he was playing.

MUDBOUND is definitely a movie worth seeing, and story worth telling, even if it had me jumping out of my chair with fear it would end too unhappily for me to bear. But fortunately, or predictably, that wasn't the case.
Posted by Lally at 4:08 PM