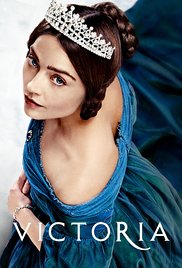 As with THE CROWN, VICTORIA purports to give an inside view of what goes on in the private lives of royals. The creators of these series humanize these historic figures by having them deal with domestic and relationship dilemmas and challenges similar to those most of us face. And by turning these monarchs into mindful, sympathetic characters who only mean well and are helplessly trapped by the limitations of the roles forced on them by royal heritage.

My guess is their private lives are a lot more vapid with much less high-minded drama and much more petty drama, the kind spoiled children create. The reason I watch them and enjoy them is the history that slips in, including the costumes and rituals that go with that, but more significantly, the acting.

These Brits know how to act, and Jenna Coleman as Victoria is so engagingly, and often poignantly, empathetic (really, that Queen Victoria?) and, well, doll-like, you can't help but become enthralled with her version of the queen. But the latest episode, covering the beginnings of the so-called Irish "famine" (which wasn't a famine, the Irish Protestants and Anglo-Irish and English rulers and landlords in Ireland all had plenty to eat) hit home for me.

My grandparents' grandparents were severely impacted by that ethnic cleansing event, so the depiction, even though whitewashed, still moved me, as it does Victoria supposedly, but all I could think was, Sell one of your palaces or all your jewels and treasures and you could've kept a million people from dying unnecessarily.

The one thing it does get right though is Trevalyon's anti-Irish-Catholic prejudice and evil intentions (he was the Brit in charge of dealing with "the famine") that were behind the genocide. Though the focus is mostly on the "good English" who were supposedly well-intentioned, even if they didn't follow up on any of those intentions in any way that stopped the devastation and starvation and death.
Posted by Lally at 12:05 AM