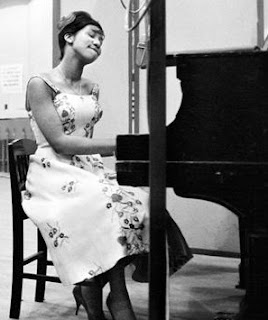 In my late teens, from 1958 to 1961, I spent a lot of nights drinking wine in a paper bag sitting on the sidewalk with my back to a metal grate out of which came live music from the bandstand directly below the grate in the Village Gate which was a nightclub in a basement under what was called a "bum hotel" in those days.

I had a crush on Nina Simone who played there regularly, and when I had the money I'd sometimes get into the club to hear her sing and play piano. I was playing piano in less well paying clubs in those days and someone hipped me to a new act performing there that I should get inside to catch, so I got the dust (short for "gold dust"—one of the many hip terms my fellow jazz musicians used for money in those days) and went in to see this teenage girl with the cool name Aretha play and sing.

She and I were the same age and in my memory we were both sixteen or seventeen, so it would have been before her first album came out, but maybe we were eighteen and this was her tour for it, either way I'd never heard her. When she sat down to play I dug her basic blues chops, and then she opened her mouth and filled that little space so powerfully that all the usual nightclub chatter that went on during sets and musicians hated, but was common in those days, ceased.

I remember it just being her and the piano, alone on that stage, blowing everyone's minds with the intensity of her talent. I never stopped listening to her and never stopped being blown away by her talent. Rest In Peace Aretha.
Posted by Lally at 2:01 PM