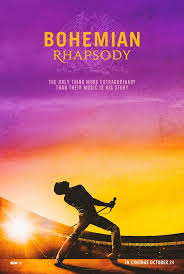 I've read and heard criticism of BOHEMIAN RHAPSODY for it's being a typical biopic with the typical biopic tropes, and for not being authentic enough, like manipulating the facts to make for a more dramatic story arc, not giving enough time to Mercury's last big love, Jim Hutton, and too much time to Mary Austin, the woman he was engaged to and called his best friend (and left his home and most of his worldly goods to, Hutton got a big chunk of money, equal to a million dollars at present rates), etc.

But for my taste, if you see it in a theater on a big screen with big theater sound, it's a thrilling ride, despite some lulls and obvious contrivances. First of all Rami Malek as Freddy Mercury gives one of the great movie performances of the year, and the producers and director were smart enough to actually use the original recordings so it's Mercury's voice we're hearing, making the movie theater experience like attending a Queen concert with front row seats. That alone was worth the price of admission. The casting was amazing across the board, with the actors playing the rest of the band almost mirror images of the real guys.

Every quibble I had was balanced by another moment in the film that landed perfectly. Like when Freddy tells his female fiancée he thinks he's "bi-sexual" and she says "No Freddy, you're gay." I wanted to say Wait up, from what I've read he had sexual relations with several women (which the movie doesn't mention), as well as a lot more men (the opposite of my experience with mostly women but a number of men). Though I hate labels and categories (I used to call myself "pan-sexual" and to those who'd call me "bi-sexual" I'd point out that my experience is there's as many kinds of human sex as there are humans, not just two), lately I've revisited old journals and realize I was more into men than I remembered, which made me want to acknowledge and embrace what some would call my "bi-sexuality" since that category seems to be getting a lot of flack these days.

But then there's a simple scene after Mercury gets the AIDs diagnosis when on the way out of the clinic a sweet looking young man recognizes the Queen lead singer and quietly voices a two-note riff made famous by Mercury, which Mercury quietly echos, and the tears just flowed for me as every emotion connected to friends and lovers I'd had who died of AIDs—including survivor's guilt that I never even contracted it—overwhelmed me.

So, it might be how you respond personally to the emotional bits in the film, but for me, they mostly worked, as did the music.

[PS: I've been informed by Susan Anton in comments below that it's not Freddy Mercury's voice in the film, but I've read some reports that it is mostly, either way it works for me....I also want to make clear I'm not diminishing Mercury's being gay with my remarks about "bi-sexuality," just clarifying my own thoughts and feelings about that label and it's use to dismiss genuine feelings and experiences...]
Posted by Lally at 5:52 PM