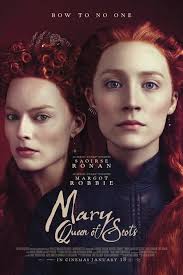 Saoirse Ronan and Margot Robbie, how could anyone not want to watch anything they might be in, let alone together. And as actors they don't disappoint. But the writer and director do. The inconsistency of Ronan's Mary doesn't always make dramatic or narrative sense, nor does Robbie's Elizabeth, played mostly as weaker than any other Elizabeth in film. I prefer Kate Blanchett's version in ELIZABETH. But MARY QUEEN OF SCOTS is still worth watching for Ronan and Robbie, despite the missed opportunity to create something worthy of these two stars.
Posted by Lally at 11:53 PM