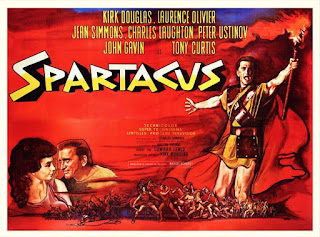 Watched the beautifully restored SPARTACUS on TCM the other night and found it more relevant than ever, though I wonder if younger people would see that underneath all the old Hollywood habits (like casting Brits to play the upper class Romans etc.). There's so much terrific movie making and acting in it (except at times for poor Tony Curtis cast for his looks not his accent).

At the time it was made and producer/star Kirk Douglas decided to give blacklisted Dalton Trumbo the writing credit, it seemed daring the way the story highlights the similarities between McCarthyism and other antidemocratic authoritarian tactics. I remember drawing inspiration from my memory of this 1960 movie later in the 1960s when a Dean at the U. of Iowa warned a student rally that anyone who used the microphone to speak would be expelled. I wasn't a scheduled speaker, but I went to the mic and told the crowd of more than a hundred that he couldn't expel all of us, and suggested that everyone come to the mic and state their name, as I did mine and then stepped away to make room for others. After a moment of hesitation the first student stepped up, followed by another and another until everyone had done it and the Dean's threats were rendered meaningless.

Despite the Hollywood ending in SPARTACUS, the hope at the heart of it is still poignant, maybe more than ever.
Posted by Lally at 4:31 PM