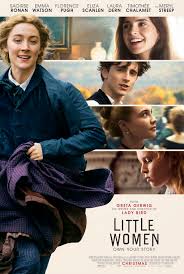 I chose to go out to the movies tonight to see LITTLE WOMEN. Before it was even over, I was thinking the reason Greta Gerwig didn't get nominated for Best Director could only be sexism, because it is among the three or four best directed films of 2019. I was worried when I heard Gerwig had deconstructed the narrative timeline of the book, but she did it so brilliantly it truly heightened my engagement with the film and the emotions it kept generating in me.

I laughed, I cried, I felt fear and hope and joy and moved and inspired. The cast was so good everyone in it deserves high praise, but Saoirse Ronan especially, once again proving she is among the greats of our time, of all time. Meryl Streep was a delight to watch work, and Chris Cooper in only a few scenes in the movie did more with only a few lines, or even none, and equally few gestures, than many actors nominated for awards did with multiple scenes and lines and gestures in the buzzed-about movies of 2019.

Seeing it on a big screen highlighted the deep artistry of Yorick Le Saux, the cinematographer, too. Half the scenes in the film were worth framing and hanging on your wall. Greta Gerwig's LITTLE WOMEN turns out to be a true work of cinematic art, an instant classic, and for my taste maybe the best movie of 2019.
Posted by Lally at 12:29 AM