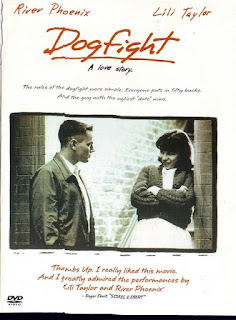 Watched this movie tonight on TCM. Hadn't seen it since it came out in 1991, when it had a deep impact on me. It takes place over one night in San Francisco in 1963 with a coda in '66. It gets a few things wrong, but they're minor compared to what it gets right about the time and place and four newly minted marines on a one night leave before shipping out to Viet Nam, not yet the total morass it would become.

It stars River Phoenix in what must have been one of his last films, and Lili Taylor in one of her first films. I fell in love with her the first time I saw it and again tonight. I joined the military in 1962 and got out in '66 and spent time AWOL in Frisco in '62, so it resonates. I wasn't a marine and I didn't go to Viet Nam, but I did end up marrying a woman I'd only met in person once four years earlier, who had a sightly deformed face, which also resonates with the plot.

It's a powerful little movie with two powerful performances, at least, and well worth seeing.