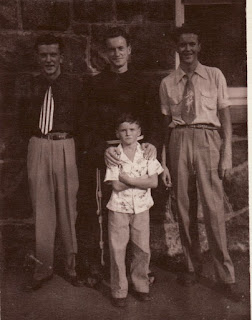 I've posted this before but it's another favorite. I was born when FDR was still president and was two when he got reelected for the third time. But the first presidential election I paid attention to was in 1948 when I was six and predicted Truman would win despite the premature headlines declaring Dewey the victor.

This photo was taken I'd say in the late '40s or 1950, after my maternal grandmother came to live with us and began making my pants, which I never liked but didn't want to hurt her feelings. It's with my three older brothers, Robert, Tommy (who'd just become Father Campion), and Buddy. All gone and much missed.