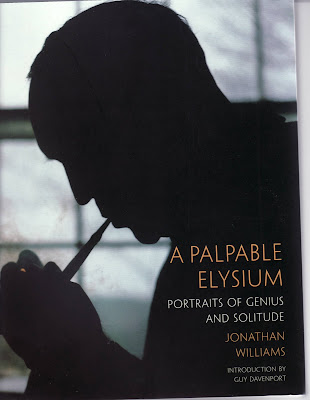 I got a little cranky in my post yesterday, which is something the clarity and gratitude of the last post-brain-surgery eight weeks has remarkably kept me almost completely free of. So I thought maybe it was partly provoked by my finishing the first book I got on my own since the operation.

I saw it was on sale for ten dollars in the latest David R. Godine catalog, a publisher that consistently produces beautiful books to be cherished as art objects even if you don't dig the contents. [I forgot to add for full disclosure, as they say, that Godine took over the Black Sparrow press and publisher of two of my books: IT'S NOT NOSTALGIA and IT TAKES ONE TO KNOW ONE.] But I knew I dug Jonathan Williams—the late poet and publisher of fine books himself and someone I considered a friend even though I hadn't been in touch with him for years before his passing. A PALPABLE ELYSIUM is a collection of his photographs and commentary, making it easy for me to read (I'm still not up to an entire book of nothing but prose).

Jonathan was an eccentric, quirky, highly opinionated, sometimes cranky original with distinct tastes in everything. He was born to be a "Southern gentleman"—which in that time and place often meant racist as well—but ended up at the unique experiment called Black Mountain College in the 1940s with people like the composer Lou Harrison and the poet/teacher Charles Olson, as well as dancer and choreographer Merce Cunningham and composer John Cage etc. In other words the cream of what would become the avant-garde of the 1950s and beyond.

He was a gay man, in every sense of that word, and completely comfortable with his tastes and himself and took no flack from anyone about any of that for as long as I knew him (since the 1960s) and all his life from what I've heard. He sought out artists and poets and composers and others he found unique in the ways they created and led their lives and made them a part of his life (I was flattered to be among them as we met in person after years of correspondence when he showed up with his "lifelong companion" Tom Meyer at a tiny apartment I was living in in Washington DC in 1974).

A PALPABLE ELYSIUM contains photographs of some of the many friends and acquaintances he made from the 1950s to the 1990s (the book was published in 2002), as well as some of their artwork or their gravestones. The photographs are often as casual as snapshots and sometimes as unexpectedly unique and/or flawed. But with his commentary added to each, they become something much more, something that typically cannot be described any better than Jonathan did himself in the title he gave this collection: A PALPABLE ELYSIUM.

Even if you don't have the same taste as Jonathan, and I sometimes don't, if you read his comments often linking his subjects to other artists and friends and then look up the lives and work of all those he mentions in this book, you will have given yourself an education, on the highest level, in a particularly rare contingent of the avant-garde of the second half of the 20th Century.

For my taste, the book is worth owning just for the quality of its production, let alone the sometimes exquisite images (his photograph of poet William Carlos Williams not long before WCW passed is stunning and one I wish I had a framed print of hanging on my wall). But it's Jonathan's commentary that makes this book unique and worth paying attention to. His fearless judgements, his ribaldry, his appreciation of the lone genius creator whether renowned or unknown (he spent a lot of time searching out so-called "primitive" or "outsider" artists and even gives directions to their locations so you can drive the country back roads of rural Georgia or South Carolina and go see their work yourself!).

Whether comparing Whitman's tomb to Colonel Sanders', recounting a visit between Buckminister Fuller and William Burroughs, or trashing fundamentalists and conformists and the taste and caliber of most of his fellow citizens, every entry in this book is an eye opener in its own way, and totally original. That's the main point I guess I want to make is that this is a collection of photos and comments about unique individuals and art by a unique individual and artist. An incomparable rarity any way you approach it.
Posted by Lally at 8:07 AM

This looks wonderful. Thanks for telling us about it.

Aside from the fact that you've made me interested in the book you describe in this post, I wonder if there's a way for your blog to spread further outside your circle of friends. To the thousands of people who are about to go through the same thing as you are. To the people who've just had brain surgery. And their family and friends. Your writing is very inspirational and encouraging.

I agree Tore. Surgeries like that can change a person's life and inspiration from someone who has been there is so helpful.