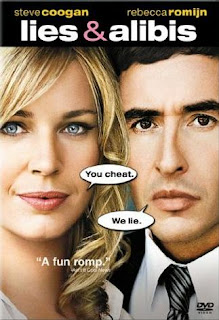 I've written about a few and there's many I don't think I have, like BOONDOCK SAINTS and its sequel that is almost a parody of what it might mean to be Irish and Catholic and be hit men. But tonight to take a break from the political news and the writing project I'm working on, I turned on the tube and the only movie just starting (yeah I'm so last decade not streaming over the net but enjoying the randomness of just watching what's on one of the zillion channels now available) was called LIES & ALIBIS (yeah the titles aren't very original either) starring Steve Coogan and Rebecca Romijn who really did seem like actors in a soft porn flick (not that I'd know but I did have friends in L.A. who worked on them or in them) but there was John Leguizamo and Debi Mazar and Sam Elliot and Henry Rollins and James Brolin and Sharon Lawrence all of whose work I admire, and a lot of actors like I used to be where you think you've seen that face before but don't know where.

And I ended up getting into it and watching it to a pretty satisfying end, because it was better written (by Noah Hawley) than most of these B movies or straight-to-video movies or whatever they're called these days. The plot actually kept me guessing a little and interested to see how it worked out and Coogan, who I definitely recognized but didn't remember from where, had a kind of underplayed charm that read as almost comic charisma like a cross between the young Dudley Moore and a B movie Cary Grant but not as handsome.

Well, that's the way I'm feeling after just watching it anyway. The good news is the violence was minimally graphic as it was more about the plot twists of a big con than the usual revenge stuff these films thrive on.

Of course the plot was completely contrived and over the top, nonetheless it was fun and easy to watch with a late night tired brain.
Posted by Lally at 11:48 PM