I first met Spain through my first wife Lee. He was a friend of hers from Buffalo. When we got married there in 1964 he gave us a Zippo lighter he had engraved a really cool drawing on, as well as a self portrait on his chopper which we had framed and I have no idea where either of them are now, which saddens me. She introduced him to me at a party thrown for us, her really, before we married (three days after we decided to) by the Buffalo Road Vultures, an outlaw biker gang that Spain was kind of the official artist for, drawing their logo etc.

By the late '60s we were both involved in radical politics and underground newspapers and crossed paths at demonstrations and other radical events in DC and NYC and San Francisco. I hadn't seen him in years, decades probably, and we never were close friends, just knew each other through Lee when she was still alive and through radical alliances. But I always dug his generous spirit and his creative chops. 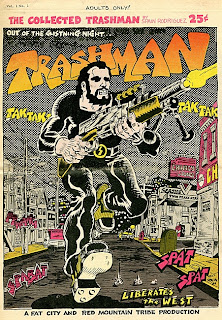 [Thought I had included a link to the SF Chronicle obit but guess my post op brain thing was fooling me. Thanks to old friend Bob Berner for hipping me to it. Here's the link.]