MARTHA KING'S OUTSIDE INSIDE 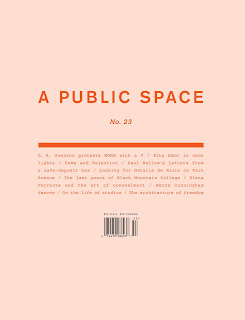 Went to a reading at The Sidewalk Cafe on Avenue A and 6th Street Thursday evening to celebrate the publication of some sections of the downtown art and poetry scene icon Martha King's memoir OUTSIDE INSIDE. Several poets read excerpts from it, along with memoir poems or prose of their own. Though unfortunately my friend and I were late (NJ Transit), everyone we got to hear was terrific and the sections from OUTSIDE INSIDE they read were brilliant.

The magazine itself is so well produced and appealing, I suggest you get it just to have as a work of art itself. But especially for the bits of OUTSIDE INSIDE. As described in the table of contents ("Baz and I had Fame and Rejection. We lived in a flow of contradiction.") and as its title suggests, Martha and her husband, the artist Basil King, lived the classic bohemian roller coaster lives of making and being a part of cultural history while at the same time being overlooked and/or dismissed at certain times by those writing that history.

But now Martha has written her own take on that history and it's a fundamental document of survival inside and outside that world. Here's a sample paragraph describing the eighteen-year-old Martha who had her moment at the famous Black Mountain experimental school and collective of creative originals: