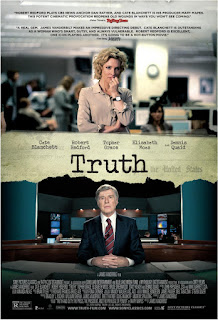 This movie got some bad reviews, including some by critics I often agree with. And I can see some of the flaws that caused some of that. Part of that might be attributed to the fact that the director/screenwriter is young and most of his experiences are as writer and/or producer. This is the first film he directed and he makes some of the mistakes of a first-time director, including being a little overzealous in getting the point of a scene across.

I went to see TRUTH, because I've always admired Robert Redford's acting, even when he was still just considered a pretty boy by most. I recognized, from my own experiences acting in films, that Redford's minimalist acting style was unique in many ways and worked well with almost all the projects he chose to do. He was originally an artist and as a film-acting one, he uses very few brushstrokes to create an impact.

So I wasn't disappointed to watch Redford play Dan Rather in this story about a seminal moment in the history of mass media news. Rather's and his producer Mary Mapes's (whose book the film is based on and who is aptly played by Cate Blanchett) reporting about George W. Bush's special treatment in the U.S. military when many of us had friends dying in Viet Nam because their parents weren't wealthy and politically powerful, was attacked for details that didn't change the truth of the story but changed the focus of the media.

The success of the Bush family and their political machine in changing the subject from the then president's lies about his service and his having behaved in a manner that would have gotten the rest of us who served in the military and didn't have his connections court martialed and probably imprisoned was a turning point in TV journalism.

The film dramatizes the moment when the right won the battle of media focus. No longer would stories be about the facts but about conceding to the right's demands to have the news framed in ways that took attention off their misdeeds and failures and crimes and put it on opinions and attitudes and the idea of misinformation deserving equal time with the truth. The tactic of attacking any reporting that made them look bad won the day and continues to, a la the recent CNBC Republican debate and the reaction from the candidates to the moderator's questioning based on facts etc.

The story is a necessary one and I'm grateful it's been made into a movie, though the power of movies or media in general has been greatly diminished after the shift this movie chronicles. Still, it's worth seeing, worth having younger people see it as well, even if at times it's tries too hard (including the music soundtrack). Redford doesn't. He captures Dan Rather's awkward charm without imitating him—no accent, no strange metaphors, just the self-conscious smile and the deep rooted integrity.
Posted by Lally at 12:03 AM