CAN YOU EVER FORGIVE ME? and SORRY TO BOTHER YOU 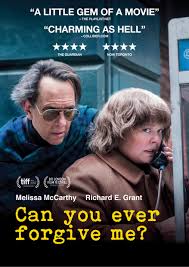 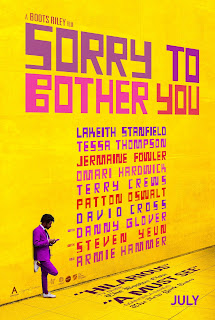 There should be an award for movies that defy the odds in even just getting made. CAN YOU EVER FORGIVE ME? and SORRY TO BOTHER YOU (two titles my post-op aging rapidly brain sometimes confuses from their seemingly similarly apologetic tone) are two movies that deserve kudos for just making it to any screen.

CAN YOU EVER FORGIVE ME because it's a story about an aggravatingly ill-mannered middle-aged lesbian writer of obscure books who forges literary letters by more famous authors to sell. Imagine being at the meeting trying to finance that film and get it directed (perfectly) by a woman (Marielle Heller)!

And SORRY TO BOTHER YOU because it's a film from a black perspective we haven't seen before (Marxist fabulism? "Black" sci-fi Jonathan Swift class analysis of contemporary corporate criminal practices? etc.) written and directed by a "black" man (Boots Riley) who owns his economic theme(s).

SORRY TO BOTHER YOU is the most original movie of 2018, and for that alone should be among the nominations for Best Picture, but it also stars Lakeith Stanfield (who deserved a past nomination for his role in GET OUT) who easily could and should have been nominated for his amazing performance in SORRY TO BOTHER YOU that nailed the satire, comedy, reality, and so subtly nuanced aspects of a very broad themed flick. (And Tessa Thompson and Armie Hammer make this movie worth watching as well).

CAN YOU EVER FORGIVE ME? has won a nomination and some awards for Melissa McCarthy's performance and Richard E. Grant's (Best Supporting Actor nod, as they say) but Dolly Wells deserves one too (though she also has been getting some attention and mentions). But SORRY TO BOTHER YOU deserves a lot more attention than it's received,

If you haven't seen either of these films, do.
Posted by Lally at 12:01 PM