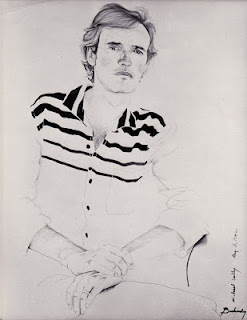 The first done by my good friend Don Bachardy in 1982 or '83, right after I moved to Santa Monica. He had me sit at his studio behind his and Christopher Isherwood's house in Santa Monica Canyon. I look sad partly because I was tired after sitting for hours while he sketched. It's a huge portrait I couldn't afford to buy, so this is taken from the photo of it Don gave me after it was completed. 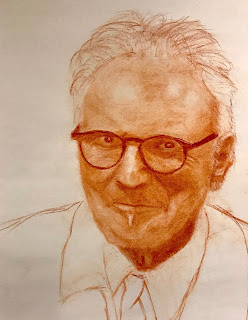 The latest one, big but not quite as huge as Bachardy's, was done very recently by my good friend Tim Lyons, from a group photo taken at one of my recent California readings. Obviously a happier me.
Posted by Lally at 7:17 PM