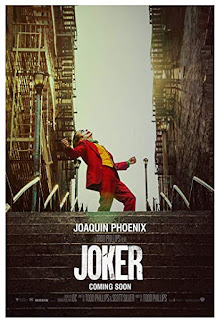 JOKER got the most Oscar nominations of any film of 2019. I find that depressing. I have friends who loved it, but I found it excruciatingly painful to watch. Some scenes were well shot and acted, but some looked like they were copied from a badly contrived and executed Charles Bronson vigilante movie from the era the JOKER's set in.

The underlying message seemed to be that brutal and deadly violence is justified if it's done in the spirit of revenge for harm's done or imagined, and that uprisings against economic inequality and political corruption and moral bankruptcy are fueled by the thrill of violence (THE DARK KNIGHT also had an underlying message of justified violence very much in the using-fascist-methods-to-defeat-fascism vein).

I can see why Joaquin Phoenix's performance is being feted by critics and award givers, but to me it was self-indulgent to the extreme. And I understand, I think, the arguments for how the film shines a light on the need for society to address the problems and consequences of untreated mental illness, but to me the film seems more directed toward blaming mental illness for a lot of society's problems and violence.

We all have our own taste and you may love JOKER, or at least be impressed by it. Not me.
Posted by Lally at 11:59 PM