LINDA RONSTADT: THE SOUND OF MY VOICE 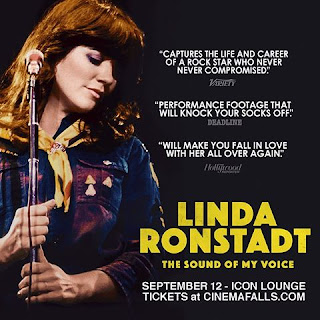 Like the quote on the poster says, this CNN documentary about Linda Ronstadt made me "fall in love with her all over again." It's not the best documentary film I've seen, but there are moments in it when that voice and the songs she picks to showcase it, hit the heights of artistic expression.

I've been digging her voice since her Stone Pony days, and got to see her perform in The Pirates Of Penzance with Kevin Kline on Broadway before the film was made (and go backstage, I knew Kevin then and he introduced me to her). She could, as this film shows, sing any kind of music from blues and rock and country, to operettas and jazz and Mexican traditional.

The high point for me comes in the footage of her with a Mexican mariachi band. My head just about exploded from the power of her sound and the joy it overwhelmed me with. I watched it on demand and couldn't fast forward past the ads so didn't get the full impact I would had I'd seen it in a theater, but even so, happy I got to see it any way.
Posted by Lally at 12:08 AM