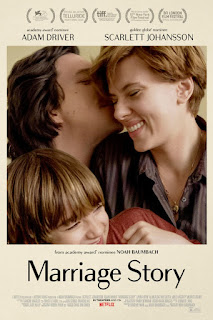 I'm in the process of catching up with the movies I missed from 2019. MARRIAGE STORY has already gotten some nominations as well as critical acclaim. And though Laura Dern won the Golden Globe for Actress in a Supporting Role, Adam Driver has gotten the most attention. And he's good in it, but everyone is good in it. Especially Scarlett Johansson, who transcends the sometimes precious story and the other great performances to turn in an award worthy display of movie acting chops. 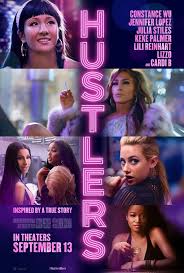 A lot of good acting in HUSTLERS too, though the story-telling isn't on the level of MARRIAGE STORY (despite Noah Baumbach's occasional indulgence, or more than occasional). But Constance Wu, despite her obvious commitment to the role, sometimes had me doubting her character's authenticity (not good in a movie based on real people), while Jennifer Lopez's performance had me totally forgetting the star and buying the character.

Neither of these films are award winners for my taste, but of the two MARRIAGE STORY is considered the most worth watching. Though in my experience almost any movie is worth watching for something.
Posted by Lally at 12:55 AM