"The heart stops briefly when someone dies,

a quick pain as you hear the news, & someone passes

from your outside life to inside. Slowly the heart adjusts

to its new weight, & slowly everything continues, sanely."

—Ted Berrigan from "Things to do in Providence" 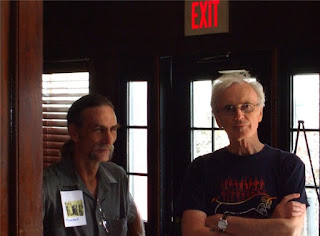 This photo of Howard and me was taken in Jersey over a decade ago at the last family reunion. Howard was married to my niece Linda and was known for his quiet and calm presence that exuded strength and integrity and, the way I saw it, an amused take on the folly of a lot of human behavior, especially mine.

I may have been wrong and just self-centered about that. But I'm not wrong about his being a loving and beloved husband and father. The tributes to him coming from others in the clan who knew him better than I did, are better than anything I could write. I just wanted to send my condolences and love to family and friends of his and mark his passing. 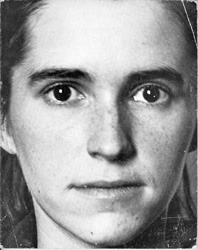 It's been a rough time for the poetry community lately, lots of deaths, most of them I knew, like the two I've already posted about, Doug Steindorff and Doug Lang, and one of the icons: Bernadette Mayer. I met Bernadette around 1970 and immediately fell in love with her work and her presence. We shared some things in common, both aesthetically and poetically, though she might have later disagreed.

Her sharp sense of humor sometimes intimidated me, but her beauty, intellectually and physically, seduced me. We didn't see each other much over the years but kept up to date on each other's lives through mutual close friends, poets Annabel Lee and Simon Pettet. So I knew she was facing health issues as she had before, but this time proved more ominous. Condolences to her family, friends, and fans.

[If you don't know her work there's a selected from New Directions, or individual books that are favorites of mine: her STUDYING HUNGER, MIDWINTER DAY, and POETRY STATE FOREST] 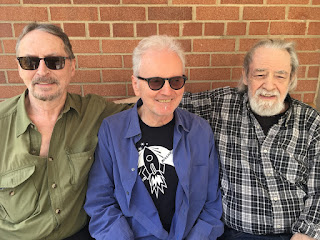 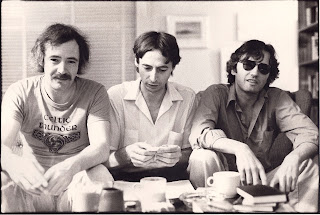 I've posted these photos before of poets Terence Winch, Doug Lang, and me in DC in the late 1970s and 2018 (Doug's the only one with facial hair in the early shot). He was born and raised in Wales. I first knew of him from his 1973 end-of-the-'60s paperback novel, FREAKS, that he always seemed embarrassed by but I dug and still have. The rest of his output was poetry as original and impressive as anyone's of our rapidly diminishing generation (type in his name on my blog LALLY'S ALLEY, to find posts I've written about his work).

He had an encyclopedic knowledge of literature, music, movies, and art, and was always fun to discuss any of that with, even after losing his short term memory in recent years. He often seemed slightly amused, or bemused, by my excited enthusiasm about my own taste in the arts, but in any encounter I always felt the love we had for each other underneath it all. My condolences to all who knew and loved him, especially Terence, Sandra, Phyllis, Bernie, and Susan et al. 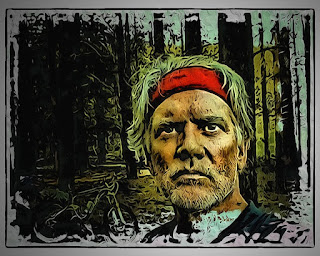 Not sure who created this enhanced portrait of Doug, but it captures some of what made him special. Like him it's fierce, over-the-top, heroic, ridiculous (Rambo on a bicycle), movie-star handsome, rugged, intense, and iconic. What 's missing is the unconditional love that poured out of him. Since we first met in 1980s LA when, as he told it, our mutual friend Hubert Selby Jr. told me to "talk him" [Doug] "down" I've been trying to keep up with him and his loving spirit.

Whenever we expressed our love for each other we used the word "adore" and it was, and still is, the way I feel about him. I adored the way he talked and wrote (pretty much every utterance was uniquely poetic, darkly hilarious, and totally original). and I adored the way he looked and carried himself, even when, maybe especially when, he was goofing.

And damn was he supportive. You knew he had your back even when he was flat on his from heart problems and cancer and more. Unlike anyone I've ever known in my 80 years. We're all unique in our own ways, but Doug was the most unique, to me. When I gott the call that he had passed at 61, I had trouble accepting it, something I've otherwise grown good at. But the thought of no more almost daily posts and comments from Doug on my computer anymore, left me heartbroken in new ways.

Deepest condolences to his wife, Cynthia, and their children. Life is often unfair, and often what's most unfair about it for those left behind is death. 19-year-old me, and buddy Murph, during Basic Training at Lackland Air Force Base outside San Antonio, Texas, February 1962, at the start of my four years in the military

NOT SO LONG AGO 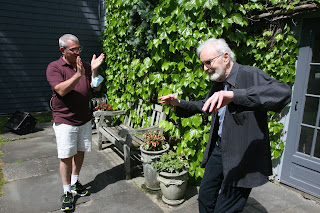 Almost six months since my 80th birthday party, so many sweet memories, including this one of me executing my only dance move left while being cheered on by dear friend Chris Coreshi.

Email ThisBlogThis!Share to TwitterShare to FacebookShare to Pinterest
Older Posts Home
Subscribe to: Posts (Atom)
To respond to a post, just hit "comments" at the end and feel free to wail. [But no cursing people out or telling lies about them.] Or comment on Facebook where my blog posts are reposted.