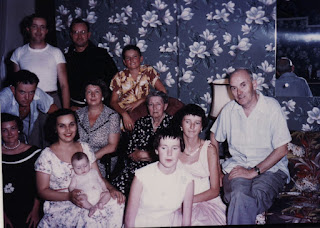 That's me in the floral shirt, my two oldest brothers, a Franciscan friar and a musician/high school music teacher, both WWII veterans, to my right, in front of them my third oldest brother, just leaving his life as a teamster to become a cop, leaning over his wife, daughter of a cop from the next street over, we all called "Sis," an independent working woman, my mother and her mother in front of me , in front of them my other sister-in-law, an Italian-American accordion player from DC who led an all women band during "the war," her firstborn on her lap, and my two sisters, the oldest with the then fashionable "pixie cut," the youngest about to enter the nunnery for a few years, and the only one in this photo besides me who's still alive (though she woke up recently blind in one eye and almost blind in the other), and our father, a seventh-grade-drop-out who had just started a home repair business and had installed that mirror to make our small living/dining room appear bigger.

I've known "Sis" since I was a kid, a tiny woman, deceptively tough under a sweet spirit. No matter how much my behavior might have made her uncomfortable she always treated me with honesty, tolerance, kindness, and love, with a little humor thrown in. I adored her and broke down when I heard the news that she had passed last night at 93, even though she's joined my brother, her husband and is at peace now. The Irish I grew up around, like her, always said to the families of the deceased at the wakes: "Sorry for your trouble" because they believed the departed were at peace, and it's the ones left behind who face the trouble each death presents. My heart goes out to all who knew and loved her. 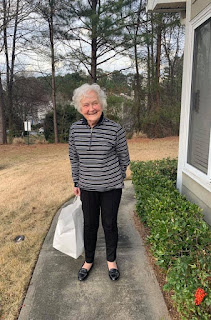 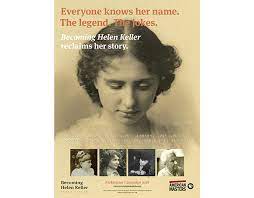 BECOMING HELEN KELLER is a PBS documentary in their American Masters series. It's pretty well done and shapes a more realistic and complete portrait of one of my sheroes. I had a crush on her as a boy (I know, I know, I get crushes on almost everyone I encounter, in real life or through other means) and when I later read her writing and speeches in my twenties, she became a model for a life as an activist/writer. And I still have a crush on her.
Posted by Lally at 11:59 PM No comments:

"While looking for the light, you may suddenly be devoured by the darkness and find the true light."  —Jack Kerouac (from The Scripture Of The Golden Eternity) 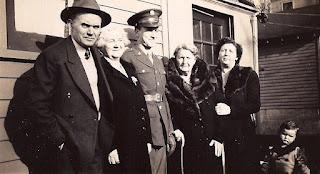 Love this shot of my father; his Irish immigrant mother (who lived down the street from us with my Irish immigrant grandfather and one of my father's brothers and his family); my brother Tommy who'd joined The Army Air Corps (WWII was still happening) and would later become Father Campion, Franciscan friar; my mother's mother (who lived in Newark but would soon be widowed and my father would turn the back porch we're standing on into a bedroom for her to live with us); my mother (who I have always adored, both before and after she passed when I was 23); and scowling little me (notice the laundry line pulley above my mother and me). 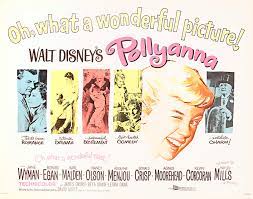 A few weeks ago a friend insisted I watch the Disney movie POLLYANNA. I was way past Disney when it came out in 1960, the year I turned 18, so I'd never seen it. But, I had heard the term used in connection with me over the years even then (the original story came out in 1901) as a put down of what some supposedly more sophisticated people took to be my naïvete and childish optimism.

I had already written dark poems and stories about racism and drug addiction and more in 1960, but my usual attitude was based in a belief in the infinite possibilities of love, So when I encountered my first intellectuals and academics and literary scenesters, I was often treated as less intelligent because I rejected cynicism and even irony for sincerity and tenderness. The word "sentimental" was used as a weapon against me.

So seeing POLLYANNA for the first time was a pleasant surprise. First for the extraordinary cast of Hollywood character actors and aging stars, and then for the unfolding story, and then for the obvious message of love and gratitude conquering cynicism and pessimism. So much so that I found myself close to sobbing at the end when my friend, the incomparable psychiatrist author Mindy Fullilove, said: "that's you, Michael."

Though I don't think I'm ultimately worthy of the comparison to the Hayley Mills character's purpose and impact, I sure am gratified that someone thinks I am.

My youngest child, Flynn, turns 24 today (my two older offspring, Caitlin and Miles, in their early 50s), celebrating in Manhattan where he lives and works. Here's a photo of him and me when he was in his early schooldays, and one taken pre-Covid of us goofing in a neighborhood restaurant. How precious are the days we get to share with those we love. 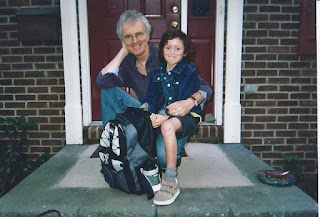 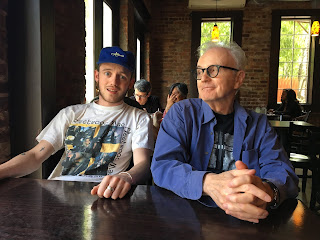 THE MANY SAINTS OF NEWARK 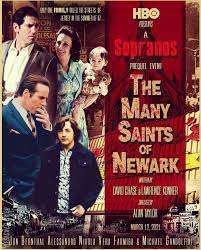 This Tony Soprano origin story took a while to start making sense while I figured out which actor was playing which character from THE SOPRANOS. Some did a better job than others. And though Ray Liotta is as mesmerizing as ever, and Michael Gandolfini (James's son), as the teenage Tony, does a fine job, the movie belongs to Alasandra Nivola as Tony's uncle Dickie.

My mother grew up in Newark and her parents still lived there when I was a little boy in the early 1940s, and I went to high school there in the 1950s, so I know the city well and was disappointed to not see more iconic landmarks and more authentic row house styles and looks, but that shouldn't bother anyone else. If you loved THE SOPRANOS you'll love THE MANY SAINTS OF NEWARK. If you didn't, you probably won't.

ONCE UPON A SCREEN

It might be hard to believe, but I have very rarely looked myself up on the internet. Partly because when I first got on it many years ago and did, almost everything I found contained misinformation. I realized pretty quickly that we don't have much, or any, control over these things. E.g. when I joined The Screen Actors Guild in 1979, there already was another, older Michael Lally, who had the right to use the name and "Mike Lally" as well, and he had a son "Michael E. Lally" who had the right to use "Michael Lally" when his father died. And there was a famous actor in Ireland named "Michael Lally" (affectionately called "Mick Lally" in Ireland), some of whose credits have been at times on the page for me (SAG wouldn't let me just use "Lally" so I added my middle name, David) on IMDb (and elsewhere). But I wanted to check a show I was on the other day so looked up "Michael David Lally" and found this odd autograph page that looks nothing like my signature back when I was in the films and TV shows highlighted, and what struck me was the great hair in the photo at the top (took me a while to identify the shot being from "Hardcastle & McCormick" where I played, as I usually did, a bad guy). What a trip, and what a life, grateful for it all, even, and sometimes especially, the mistakes. 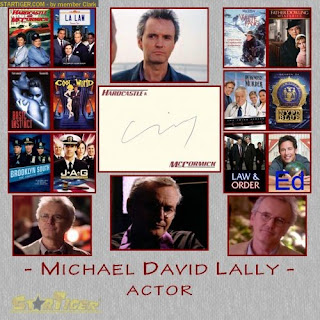 Email ThisBlogThis!Share to TwitterShare to FacebookShare to Pinterest
Newer Posts Older Posts Home
Subscribe to: Posts (Atom)
To respond to a post, just hit "comments" at the end and feel free to wail. [But no cursing people out or telling lies about them.] Or comment on Facebook where my blog posts are reposted.