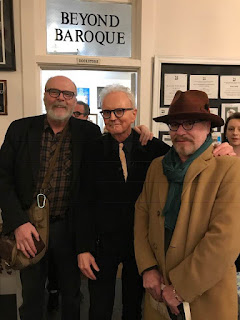 This is a photo of Rick Overton (with left hand on my shoulder), me, and Ron Zimmerman (in hat, with my left hand on his shoulder) at Beyond Baroque in Venice Beach, California, in December 2018 when I was there on a book tour for my last poetry collection, Another Way To Play, which Ron is holding.

Ron and I originally met in LA in the 1980s when he was a comedy writer for TV and began showing up at the weekly poetry readings I ran with Eve Brandstein. His mischievous and sarcastic humor sometimes made me feel like he didn't like me, but eventually I realized it was just his way of dealing with his own fears and we became good friends.

I was touched to see him at my reading in 2018 and even more so because he seemed so subdued and genuinely warm and loving to me. He may have already been sick and humbled by that, but whatever the cause I was moved and gave him a long hug. When I heard he was ill and then that he'd passed, I was overwhelmed with sadness. I'm coming out from under the weight of that and getting to the peace I find in acceptance of these realities, but damn man it's bad enough when older folks die, but when people even a little younger pass it's a jolt to the system, all the systems. R.I.P. Ron. 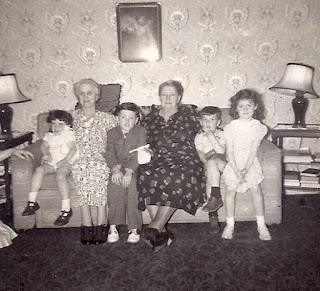 That's me squished between my two grandmothers after making my First Holy Communion, as they called it in 1949. Grandma Dempsey, on my left, lived with my siblings and parents, and her cousin, my great Aunt Allie, and me in the house this was the living  room of, and to my right my Irish immigrant Grandmother Lally and my cousin Kathi, who lived down the street with Kathi's sister and their parents and Grandpa Lally. The other two cousins, Marylynn and David, lived next door with their two siblings and parents.

We spent a lot of time in each other's homes growing up, so we cousins were very close. I always envied Kathi because she got to live with Grandma Lally, who we all adored, and which made her somehow closer to "the old country" I felt. Back then Kathi reminded me of the child movie star Margaret O'Brien, with a similar smile and mischievous twinkle in her eyes. Kathi was a few years younger so I did my best to watch out for her, something she thanked me for in later years.

After she married her late husband Ed Gross (a kind and good person) and switched parties we had our political differences, though she always found a way to make them seem humorous, unlike me. But no matter what the years wrought, when we saw each other or spoke on the phone we were instantly kids back on our street, known then as Lally's Alley, surrounded by family and love. Peace out cuz.

NEW FAVORITE MEME (made ME laugh) 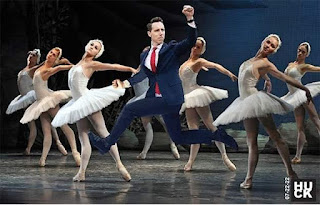 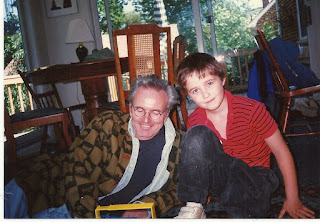 My best friend poet/songwriter Terence Winch posted this photo of me and his son, the now great fiddler (and more), Mike Winch, taken in May of 1996. I love it. Especially Mike's engagement with the camera/photographer.

EVERYTHING EVERYWHERE ALL AT ONCE 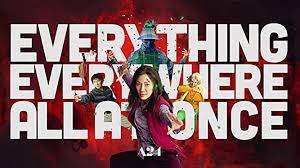 Any movie with Michelle Yeoh is worth watching. Any movie with Jamie Lee Curtis is worth watching . So since EVERYTHING EVERYWHERE ALL AT ONCE  has both of them, it's double worth watching. But even without them  (though I can't imagine anyone else in the lead but Yeoh) the movie is so inventive and fun to watch, I'd still recommend it. A blend of serious and silly, it had me responding equally with laughter and amens. If you haven't seen it yet, do.
Posted by Lally at 11:35 PM No comments: 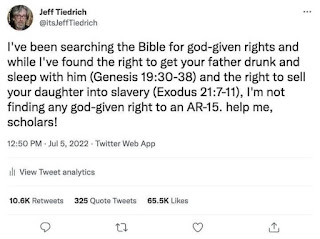 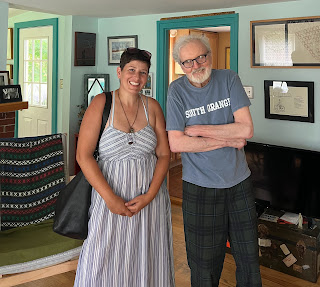 Dear friend and one of my favorite poets, Stella Kamakaris, visited yesterday with her husband Joe Keating (who took this photo of Stella and me).

STILL ONE OF MY ALLTIME FAVORITE QUOTES

"This is what you shall do: Love the earth and sun and the animals, despise riches, give alms to every one that asks, stand up for the stupid and the crazy, devote your income and labor to others, hate tyrants, argue not concerning God, have patience and indulgence toward the people, take off your hat to nothing known or unknown or to any man or number of men, go freely with powerful uneducated persons and with the young and with the mothers of families, read these leaves in the open air every season of every year of your life, re-examine all you have been told at school or church or in any book, dismiss whatever insults your own soul, and your very flesh shall be a great poem and have the richest fluency not only in its words but in the silent lines of its lips and face and between the lashes of your eyes and in every motion and joint of your body..." 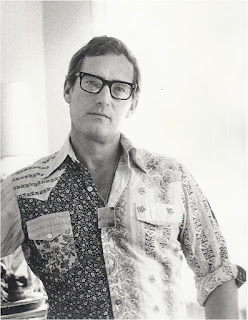 This photo (taken by ?) best captures the way I remember Kenward in the 1970s when we spent a lot  of time at his place or mine for dinners and parties and just hanging out. He was, to me, an exceptionally gentle and generous person. At the time he was the wealthiest human I'd ever been friends with, and I may have been as exotic to him.

He was a poet/playwright/performer/fiction writer/opera and song lyricist, whose most outrageous work a lot of people didn't get, but I love everything I ever read of his or saw performed. His writing was sometimes compared to the Dadaists of the early 20th Century, and he was also seen as part of the first generation of "New York School" poets who were all his friends.

His most accessible writing (though it all seems accessible to me, if you can surrender to its own logic) were lyrics for an opera about Lizzie Borden and the "only song" he wrote lyrics to that "ever made it to a juke box" as he told me, called "Love-wise"–but the writing that impacted me the most was his short fiction collection:The Orchid Stories.

Last time I saw him, I thanked him for all his kindnesses to me and as always he seemed embarrassed by my gratitude, but also touched by it. I'm still grateful.

Email ThisBlogThis!Share to TwitterShare to FacebookShare to Pinterest
Newer Posts Older Posts Home
Subscribe to: Posts (Atom)
To respond to a post, just hit "comments" at the end and feel free to wail. [But no cursing people out or telling lies about them.] Or comment on Facebook where my blog posts are reposted.