Speaking of poetry, here’s three books of poems I’ve read recently that are worth noting. Two I received as Christmas gifts (thank you TPW) and one from the publisher.

In the 1970s and early ‘80s I was a book reviewer for The Washington Post and The Village Voice. I still often see quotes from reviews I wrote used as blurbs on the backs of books, most often just crediting the paper not my byline (an old custom that seems to imply that a newspaper can actually write by itself).

I always read the back cover of a book first (and the inside flaps if it’s a hardcover) before I begin reading from the first page to the last (compulsively, even reading the copyright page etc.). So I noticed immediately that Bernadette Mayer’s New Directions book, POETRY STATE FOREST, quoted me by name from a review written almost thirty years ago for the Washington Post: “One of the most original writers of her generation.”

I still believe that. And this latest collection only confirms that belief. 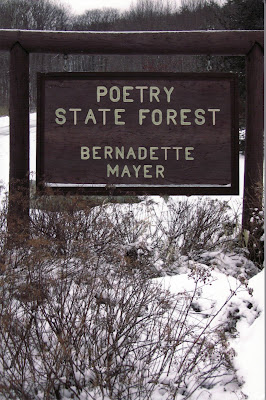 POETRY STATE FOREST is a mix of Mayer’s usual variety of approaches to making a poem, but is dominated by her original variations on the classical sonnet forms, written over the last decade, many in the waning years of the Bush Junior presidency and the growing despondency over the calamities his administration brought to the world that impacted most of our daily lives in ways large and small.

Mayer tracks the connection between that larger outer world and her daily life in ways that combines the youthfulness of her earliest experimental approaches to “the problem of the poem” and the wisdom of decades of attempting to resolve that problem, along with the limitations of health problems and other conditions of aging.

Not every poem is memorable or likely to impress everyone, but every poem is definitely original in a way only Mayer could make it. Here’s an example of one of the ways she recreates the sonnet form for her own purposes (notice the way each stanza introduces a different perspective and even different approach to what the poem seems to be going for and then it’s all resolved in a seemingly non sequitur ending couplet).

A SONNET THAT NEEDS A WEIGHT

I’m wearing 4 silk shirts
& 1 cotton one, they made the sun
be nearer, the moon is fuller

We’re getting a helium balloon
for Max’s birthday but everything’s
either real or an illusion, what about

The Sunday paper?
Why is it so scary?

[Those last two lines are indented in the poem but that's just one more thing I can't seem to do on the template for these posts.] 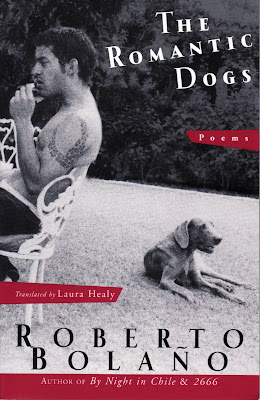 Robert Bolano’s THE ROMANTIC DOGS (also from New Directions) is a collection of his poems that reads like his novels. The translator is Laura Healy, not Natasha Wimmer, who translated SAVAGE DETECTIVES and the more recent worldwide posthumous phenomenon, 2666. But the voice is still unmistakably Bolano’s.

Here is one of the shorter poems in the book that echoes concerns in both those novels, which were his most famous and successful books and have at their hearts a deep knowledge and love of poetry as well as the problems that love of poetry addresses and/or creates.

Detectives lost in the dark city.
I heard their moans.
I heard their footsteps in the Teen Theater.
A voice coming on like an arrow.
Shadows of cafes and parks,
Adolescent hangouts.
Detectives who stare at
Their open palms,
Destiny stained by their own blood.
And you can’t even recall
Where the wound was,
The faces you once loved,
The woman who saved your life. Back in 1972, poet Charles North published LINEUPS, his first book. I remember it distinctly, because it was distinct. Nothing like it had ever been done, as far as I knew.

Poets love lists. I believe it was the first form in poetry. The litany, the list of items or incantations or attributes, etc. Charles North had the bright and original idea of taking the batting line up on a baseball team, a ready made list, and substituting for the usual names of baseball players, other names taken from various categories of naming.

For instance in the first one, instead of the names of baseball players he substitutes the names of cities, so that San Francisco leads off in first place with the designation “ss” after it, indicating on defense it’s playing short stop (New York is last in the line up as “p” for pitcher).

The form immediately gets the reader thinking of how he might see a certain category as a baseball team batting line up, as in North’s second one from that first book: colors, where “Purple” bats fourth, or clean up, and plays center field (“cf”)—or body parts where “Breasts” bats third and plays first base (“1b”) and naturally “Head” pitches and bats ninth.

You don’t have to like baseball, or even know a lot about it to appreciate these “lineups” simply as poems, as litanies of various categories of a poet’s interest. There are lineups made of movie titles, or the titles of Wordsworth poems, or the names of classical composers or mystery writers, or one made up of small to extensive quotes from obscure to well known writers.

COMPLETE LINEUPS (Hanging Loose Press) contains the entire first book from 1972—and the line drawings that went with it by his wife the artist Paula North—as well as several follow ups written since then and up to the present, and with more art by Paula.

It’s one of those pocket size almost square books that is worth the purchase just for the uniqueness of it—let alone the art by Paula North, the introduction by William Corbett, the afterword by the poet himself.

I’ll leave you with his movie title lineup (I would have chosen mostly other titles and had On the Waterfront batting clean up):

[I couldn't get the italics to work either, so just picture the movie titles in italics.]
Posted by Lally at 12:14 PM

terrific and the last page as poem (no pagination):

& the waters that brought us together!


NO TRAVELS JOURNAL is

as she in the piece quotes Lin Yutang:

"In the first place, the true motive of travel
should be travel to become lost and unknown...."

never "canonized" but (to my mind/experience) Essential..
Andrea Wyatt and Rochelle Ratner...