Went to an event for my friend Robert Zuckerman last night at an exclusive Manhattan club that was hosting an exhibit of his photographs.

Robert makes his living shooting stills for movies (some of which end up being the posters for films, like TRAINING DAY, NATIONAL TREASURE, TRANSFORMERS and THE PURSUIT OF HAPPYNESS just to name a few).

He also takes portrait shots of the famous and unknown, from David Bowie to my eleven-year-old. He took the photo of me that's most often available on the web and that I used on my books in the '90s (and I'll stick in here as an example). 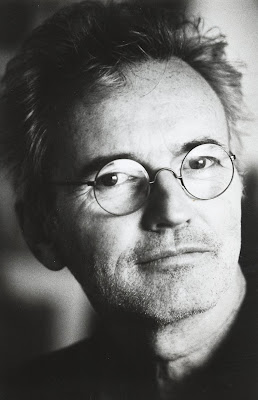 But what he's become best known for in the art world and among many of his friends as well as strangers discovering him for the first time, is a continuing series of photographic portraits with little essays beneath them describing the circumstances of the shot—how Robert encountered this person, and what that encounter was like etc.

He used to email these shots and mini-essays (or I guess you could call them maxi-captions) to friends and I (and I suspect others) encouraged him to collect them into a book. Which he did (and I wrote one of the prefaces for) called KINDSIGHT.

I've touted this book before on this blog, but it's worth recommending again. Seeing these portraits and the prose that accompanies them in one book, and reading through them from cover to cover, is like the best spiritual retreat you could experience. Not only is each entry like a little epiphany, but the accumulated impact of the book, or seeing and reading them in an exhibit, or going to his blog KINDSIGHT and reading several of them in succession, is the best counter to the lies and cynicism and hypocrisy we encounter every day in the media (including in comments on this blog) and from so much in the world.

It's what has always been life saving and life transforming about any kind of art done not just well but originally. Experiencing Robert Zuckerman's KINDSIGHT series, whether in book form or on his blog or in upcoming new collections in book form or at an exhibit, makes you, or at least me, remember how good people can be, how kind and generous and thoughtful and un-judgmental and loving, even to strangers.

As Robert has always been since I first met him in the early '90s in California. His big heart matches his big presence (he's well over six feet, I would guess several inches over) and the gentle nature he meets the world with in all its variety.

He showed that last night, when despite the obvious pain and difficulties he's been having in recent years with his legs, needing to use a cane to get around and having trouble with steps etc., he still stood, leaning against walls and such, to make himself available to his friends and admirers who showed up for the event, and made sure to give my little boy a prominent role at an otherwise very adult occasion (he had his portrait in the slide show of photographs that was projected onto a big screen at one end of the room where otherwise framed photographs were on exhibit and for sale, and he introduced him to the audience when he was asked to make a little speech to the crowd—and my son was thrilled that people came up to him and knew his face and name from the portrait and essay Robert did about him).

I'm sure the book is still available on the internet, and his blog is always there as well (listed among those I recommend at the right side of this page). Robert Zuckerman, a name I think should be a lot better known than it is.
Posted by Lally at 1:13 PM

Always great photos and the way he's able to draw people out in such simple but fundamental ways (such as his "Jatavia" piece), its really impressive.

thanks for pointing me towards his site. brilliant stuff.

Robert is showing his TIME MACHINE series at our gallery in Miami right now and has done very well. Not only is he an excellent artist but a special human being. He honors us at Hardcore Art Contemporary Space.