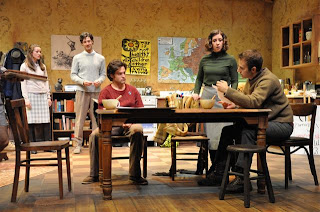 I feel like I was celebrating youth most of the weekend. On Saturday I saw a matinee of Michael Weller's play MOONCHILDREN, which played on Broadway back in the 1970s briefly and ended up a big hit off-Broadway (see this review I found online for a general idea of the production). It was directed by my old friend Karen Allen and she did a terrific job. No, Weller and her weren't the youths I had in mind, though they sure prove themselves to still be youthful in many ways.

The play is about a bunch of college students sharing an apartment in the 1960s just before, or as, things began to get really crazy, so most of the cast were college age or close to it. I'd seen the play before and knew it from having read it back in the day as well, but some of the performances in this production at The Berkshire Theater Festival in Stockbridge were better than anything I'd seen before or imagined.

I wish I'd seen the Broadway production with James Woods and Kevin Conroy and other actors I've known and whose work I admire, especially when they were first starting out, long before I joined them in that profession. But I felt like what I saw Saturday afternoon was almost a new play.

I especially admired the endings of a couple of scenes that I didn't remember and it turned out they were Karen's additions. Weller was at the performance and told me that, when I mentioned them, and said he thought they were brilliant additions. That's the sign of not just a secure writer, but a secure adult!

The kids in the cast who were born decades after the play was written and the time it's set in, seemed to have incorporated the styles of comedy that were around when they were kids, giving their characters a timelessness, not confined by the period. Though I suspect some of the younger members of the audience could have used some footnotes about what it was like to be faced with the draft during the Viet Nam War if your number came up.

There was a benefit afterwards for The Writers Guild Foundation (of which Weller is the president or whatever the title is for the person running it), something started by the New York office of The Writers Guild East (which I'm a member of). For a great cause, helping the caregivers (usually wives or mothers) of veterans suffering from our more recent wars. Care for caregivers. Not a bad idea, and I'm proud to be a member of a union that does work like that.

I saw some old friends and made new ones.I reconnected with people I'd met over the years but hadn't really spent much time with. It was a lovely weekend in The Berkshires, with the benefit barbecue (to raise money for the foundation) at a home someone had offered that had a mountainside view that was breathtaking. The weather was perfect too.

How can you go wrong with spending your Friday afternoon and early evening with your daughter and her husband and their little girl, then the night seeing your oldest son play bass in a cool joint backing some terrific musicians and a thirteen-year-old creative spirit, get up the next day and go to your old friend's place where you spend the rest of the weekend, starting with an entertaining and engaging performance of a "modern classic" written by someone you know and admire and like and he and his wife are there sharing the same house for the weekend along with another old friend, and her daughter (Norma Kuhling, watch for her name to come up in your future awareness of up and coming actors) is in the play, making her debut in The Berkshire Theater Festival, and whose performance is the highlight of the play (along with an old friend in one of the more adult roles, Kale Brown, playing the landlord)!

And that's followed by the benefit with the beautiful vista and old and new acquaintances, followed by an evening back at the house having great conversation only to get up the next day and prepare for a picnic for the cast and crew of the play at which these young actors play volleyball (I helped set up the net before they came and of course it fell right down but they fixed it—and seeing Michael Weller, who is my age, playing I had to prove I could still play too and did, missing the ball that came right to me for the losing point for our side (so much for trifocals and impressing the mostly young cast and crew)!

But on a beautiful day, surrounded by the beautiful natural wonders of the Berkshires countryside and the beauty and vitality and freshness of the young cast and crew (and great conversation with many of them as well as with those who were closer to my end of that age spectrum). And then a pleasant drive back to Jersey and my youngest son's pet rat "Muzzie" to care for while he is away in Canada.

Life IS good, if I let it be, despite the eternal bad news of history always in the making, including my own.
Posted by Lally at 1:46 AM