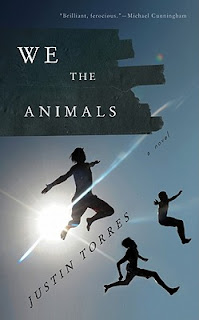 Justine Torres has been getting a lot of well-deserved (on some levels) critical attention for his novel WE THE ANIMALS. A new friend gave me a copy. I told her I had enough to read, piles of books next to my bed, almost all given to me by old friends, some of them written by them, and not a lot of time to waste on random books folks seem compelled to give me, something I'm grateful for, but overwhelmed by because I have a compulsion to read a book all the way through once I open it.

In this case, once I got into WE THE ANIMALS, I could see why it's getting all the praise. It's so well written it seems at times more like a long lyric prose poem. Darkly lyric. Or lyrically dark. The story of three young boys and their sometimes tragic parents' parenting.

But by the end, for my taste, it became too predictably dark in a way, or even ways, that seem almost cliched to me now. Just think of the predictable dark secret many fictional and memoir families hide and you'll be able to predict this one. Though delivered in a freshly told way with a few original twists. But still, what we used to call "a cheap shot" when I was coming up in the "literary" scene.

Too bad too, because up until the last several chapters, a few of which are extraordinarily well done, the writing is so beautiful you want the story to confirm the beauty of the delivery and end with some of that beauty intact or at least hopeful, some glimmer of redemption or an understanding that leads to some peace if not also satisfaction. But WE THE ANIMALS left me feeling the way I did after seeing that oil movie with Daniel Day-Lewis or the one where the big Spanish actor walked around with that cow stunning machine.

Yeah I know, I could look up the titles of those flicks if it wasn't so late and I weren't so tired of artificial despair and hopelessness in so many arty projects that get critical acclaim and awards. I don't know too many people who haven't experienced at least some of that kind of darkness on some level in their own lives, which is why, as in the great classic rebuttal to these kinds of arty downers—SULLIVAN'S TRAVELS—those suffering souls only want something that'll make them smile, just like the rest of us.
Posted by Lally at 12:29 AM