U SAM OEUR (ANOTHER HERO) 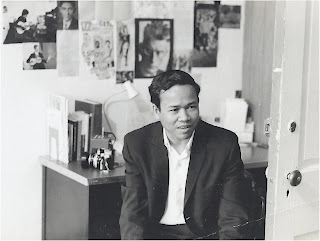 Posting about Ai Wei Wei reminded me of all the others I consider heros who are much less known and acclaimed.  U Sam Oeur is one of them, a poet from Cambodia I met in the '60s in Iowa City when we were both in The Writers Workshop at the University of Iowa. He was in the International Writers Workshop, I was in the one with mostly USA college graduates [actually it turns out Sam was in the MFA program, see Ken's clarification in the comments section].

I stood out a little because I was married with a child on the way, a veteran of four years in the military (the GI Bill was helping me pay for my schooling, thanks to Democrats), and working on a BA and MFA at the same time (first time they allowed anyone to do that) because I wasn't a college graduate yet. And Sam stood out because he was Cambodian, originally studying something a lot more practical than poetry when he wrote a poem that got someone's attention who got him to Iowa. That brought us together into a friendship I was grateful for.

That's Sam above, in my apartment in Iowa City sitting at my desk around 1967 (and James Joyce playing the guitar in the photo under the one of Dylan doing the same). If you want to learn about his amazing life, he wrote an autobiography called CROSSING THREE WILDERNESSES (Coffee House Press 2005) with help from Ken McCullough, another poet at the Iowa Workshop, who had been a minor league baseball player before getting his MFA there in poetry [see photo at bottom]. Sam writes of our friendship in it:

"I formed a particular bond with Mike Lally, who was very 'hip.' Norman Mailer wrote a pamphlet entitled The White Negro, and Michael fit that mold. He had a quick mind, was a good poet, knew his music, but more than anything else, he could run circles around anyone when it came to talking politics. He didn't have much use for white people, though he was one of them. Whenever there was a panel discussion with senators and other big shots, Michael would usually be called upon to represent the far left, and he was always the most articulate person on the panel. I recall in a discussion about Ho Chi Minh, Michael made Uncle Ho seem like Mother Theresa. I'm not sure why we became friends—on the surface we were exact opposites, but on the inside we were brothers."

Although I no longer have such a quick mind and have use for plenty of white people (and other things that have changed since then), when I read Sam's take on me back then I am moved and touched by the power of tolerance and love and poetry. 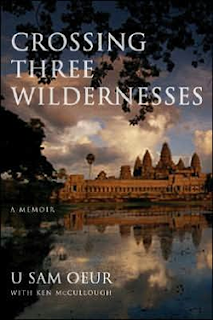 But most importantly, in CROSSING THREE WILDERNESSES Sam tells how when Pol Pot's murderous legions took over Cambodia, Sam destroyed anything that would identify him as an intellectual (especially one who had worked for the previous government when he went back to Cambodia after Iowa) except for some pages of poetry (Emily Dickinson among them if I remember correctly) which he buried near his home and then tearing his clothes and covering himself in dung he acted the role of a crazy man so that when the youthful Khmer Rouge soldiers came to get him they mostly found him amusing and thus didn't execute him but took him to one of their crude concentration camps, keeping their distance because of the stench.

He lost everything, including family members, but managed to save a son when after being confined to a camp he'd sneak out to catch by hand crayfish in a nearby river to take to his son to eat so he wouldn't starve like so many campmates were doing. (One of the only early photos of him in his book is the one above because almost all of his personal photos were lost or destroyed by the Khmer Rouge.)

Ah, read his book and you'll see all he went through and transcended and why he is one of my heros. He ended up back in the USA in the 1990s working with Cambodian youth gangs in this country and still believing in "the power of literature" as it says in the copy on the back cover of his book.

I saw him back then, and he had the serenity of Nelson Mandela or the Dali Lama. I attribute his lack of resentment and anger for what he and his family went through to his spiritual beliefs, but also to his belief in that power of poetry. 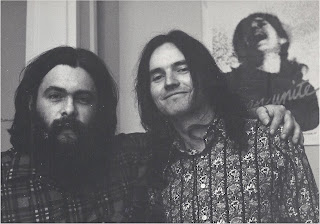 ..." belief in that power of poetry." What a dynamic phrase Michael. (Good book title by the way.)

Thank you for this post drawing attention to U Sam Oeur's book. Sam said such lovely things about you. And you certainly were the "most articulate." I had to laugh at the description of Ho Chi Minh transmogrifying into Mother Teresa.

Incidentally, I don't believe I ever met Ken Mc, but I think I remember him. Once I was studying in the Student Union area, where all the couches were, and I saw a guy walk in - with all that hair - and a girl got up to run and give him a huge hug and greeting, as a friend ( I was sitting close enough to hear the conversation ).
I've remembered this scene because I was so impressed at the friendship displayed...envious even.

Most Americans have no idea what Cambodians went through under Pol Pot. I had a student who had escaped from Cambodia - a 7th grader. Other students were asking him about what life was like there. Did he go to school? He told them no - and they thought that was cool until he told them about the slave labor on the farms - about how they escaped traveling only at night and having no idea what happened to some of their family, the refugee camp in Thailand, etc. Not going to school didn't look like as much fun as they thought it would be. Amazing stories. Good memories for you and for him.

Sounds like Sam cherishes your genuine friendship and connection as much as you do. Maybe from different worlds, but both are on the same wavelength. CROSSING THREE WILDERNESSES is at the top of my reading list. Thank you for that. I do hope you saved some of your cool clothes….

Suzanne, just the words "Student Union" evoke an entire era and some deep feelings. One of the events Ken McCullough was best known for during those years was a pig barbecue—a real whole Iowa hog roasted on a spit made by hand by Ken outside the rustic cabin he lived in at the time (he didn't just look like a mountain man, he lived like one) in honor of Allen Ginsberg who was in town for a reading. You might remember that.

And Tom, yes, there is so much we can learn from all the immigrants who come here and came here, if only we made use of their experiences and stories in our schools more.

I do remember seeing Allen Ginsberg, downstairs at the Union eating lunch - didn't make it to the reading. Trying to remember if he at one point got up and spoke briefly to the students in the large entry area, where there was usually a open microphone. Do you remember a woman name Faith, with long braided ponytail who would speak frequently? She was passionately anti-war.
Pro-war people would heckle her with shouts like, "Keep the baby Faith." She always kept her poise.

Sounds familiar but nothing comes to mind clearly. It was called "Soapbox Soundoff" if I remember correctly and in the Fall of '66 when I first arrived I got up to defend some friends who were heckled and spoke about being a veteran and and all that and said I thought what we were defending in the military was our freedom, including the freedom to speak out against war and racism etc.

Great piece on Sam, and good comments by others. I forwarded it to him. He and Syna are doing well now, after a few years of medical setbacks.

Two clarifications: Sam was in the regular MFA program same as we were--the International program hadn't been formed yet. Sam returned in the 90's as an IWP fellow. Regarding the pig roast--it wasn't on a spit--but suspended in a wire basket, in a covered pit as per Vance Bourjaily's instructions.

Suzanne, we met once at a party in Moffitt's, but you were wrapped up in theatre department banter. Rain check.

Keep on keepin' on, my brother.

Thanks for the clarifications Ken. I didn't know Suzanne had anything to do with the theater department though.

Michael, it wasn't all poets all the time. I did have some friends in drama :)
Ken, thanks for the rain check :)

Michael, I believe you know about this book: THE BURG: A Writer's Diner, by Marybeth Slonneger which is about Hamburg Inn, on Linn St.

Sylvia sent me a copy a month ago. I am mentioning it in case Ken is not aware of its publication.

Sam forwarded this to me. Great photos of him and Ken too. I met Sam in Taos, at the Right to Write poetry event. He chanted his poem about the death of his twins in Khmer and one knew it was heartbreaking even before the translator got involved. Sam and I became friends over breakfast the next morning and over the years spent some wonderful times together. Thanks for posting this Lally. Sometimes the humblest people are the greatest heroes. I've learned alot from Sam-about the ancient beauty of Cambodia and the spirits that dwell there and how laughter, kindness, forgiveness and undaunted perseverence create a poetry that goes beyond words. May there be many more such heroes in the world!

thanks for sharing that Rose.

I just came across this post in some web searching about U Sam Oeur. I'm a journalist at the Phnom Penh Post in Cambodia, and I've been reading, and enjoying, Crossing Three Wildernesses. I was hoping to track down an email address for either Ken or U Sam Oeur. Can anyone help?
-Joe Freeman
joefree215@gmail.com