QUOTE FOR OUR TIMES 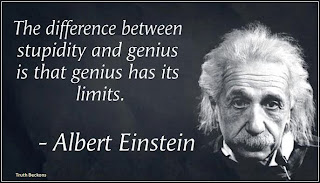 Einstein's comment seems to pertain well to liberals, especially when they wax on about man caused climate change, forgetting about warm years and periods before the industrial revolution.

Jim is loose again, get the hook!!!

Yes there have been periods of hot and cold over long periods of time, as Earth moves in vast space in relation to the sun, other planets and stars. But within our own planetary biospheric system, there is absolutely zero dispute that the activities of humanity, including industrialization, pollution, overpopulation, waste, deforestation, radiatiation and more are having a very real, dangerous effect on our ecosystem, on the world we live in, on our health and well being--and this damage can be reduced and reversed by changing how we do things. Jim's reference to this as "liberal" propaganda etc is infantile and ignorant.

Robert,
Actually there is quite a bit of debate as to whether man caused activities is heating up the climate. While the US cooks this summer, Europe and Britain is concerned that the the cold and rain is liable to impact the Olympics. While the US had a mild winter, Europe and Alaska had record cold and snows this year. In the time of the vikings grapes were produced in Greenland and in England. The mild climate helped them to reach America. The Romans prospered for a 1000 years in warm weather.

You are not a conservative. A conservative is one who conserves. Your utterances and denial of reality show that you are clearly a squanderer. You wish to squander this world we live in.

Better label for him would be "parrot" Robert. This is the standard rightwing line now about global warming. As I mentioned in another recent post, there is no evidence of any historical warming period accelerating as fast as the one we're in, and that includes ice core analyses that go back long before the Romans and Greenlanders et. al. But there is tons of evidence that the climate is warming (and of course that means the average temp worldwide continues to increase at an accelerating rate) and that one of the major factors is carbon in the atmosphere coming from human activity like burning coal etc. Ordinarily I would just delete the comments from the stalker because they are mostly lies with some misdirection thrown in to distract the reader from the facts. I'll let them stand for now as emblematic of how the right works (see pie chart in post above).

There are significant scientific groups and scientifically qualified experts that disagree with the liberal funded global warming community that would like to take over decisions from the private community and impose an international standard that only the US would be required to comply with. In fact according to recent data the earth has been cooling for the last 10 years. The US heat this year has been off set by Alaska, Europe and other parts of the world. Do any global warming liberals remember the winter of 2011???

Global warming is part of a broader issue of damage to the planetary ecosystem and consequent imapact on the well being of all species resulting from human endeavors and behaviours. There are too many warning signs to deny, and doing so (denying)endangers us further by forestalling remedial change.

Robert, I am a bowhunter. My license fees go to improve and manage the wildernest enviroment. What do you do for the enviroment?

recycle, don't litter, buy natural/organic/non-toxic products whenever possible, don't drive when I can get it done by phone/email/fax...

Mr. Lally,
I was going through some old letters today and happened upon a stack of letters from Jim Haining between 1972 and 1980. After I moved to CO we exchanged letters for awhile. I was an avid supporter of Salt Lick Press. Jim was a classmate at Quincy. I have a copy of your "Catch my Breath"
Jim was an interesting and unique
person. sorry to hear of his passing Bill Harris - trlgpa@skybeam.com