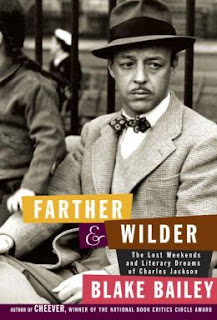 The subtitle to this biography of Charles Jackson, author of THE LOST WEEKEND among other books, is: The Lost Weekends and Literary Dreams of Charles Jackson. I wanted to read it when I first heard about it, and then my good friend, novelist Delaune Michel, sent it as a gift and once I started it I couldn't put it down.

I doubt everyone will find it as compelling as I did. It's a more or less repetitive story once the traumas of childhood are gotten out of the way. And there are some pretty serious ones I'll leave you to discover if you read it. The main point about Jackson that biographer, Blake Bailey, makes, it seems to me, is not that Jackson was an alcoholic who contributed a book to the literature of alcoholism that had an enormous impact, or even that he was also a homosexual throughout his life despite his marriage and daughters, but that Jackson wasn't as great a writer as he wanted to be or as sometimes others saw him as.

I have to say, I read a lot of biographies and autobiographies, more than fiction these days, but I hate it when writers do the horse-race kind of comparisons that makes the mistake of judging works of art by their commercial success, or even worse, judges them by their success among academics who often assign importance to work that furthers their own theories or relationships or careers etc. Reading FARTHER & WILDER made me want to find whatever is in print or available on the Internet of Jackson's so I can judge for myself what at least I think of his work. That's a good thing, as it is that this book has brought attention to Jackson, even if for the wrong reasons at times.

Bailey makes Jackson out to be a literary pioneer in terms of his expose of what it was like to be an alcoholic (and pill addict) and a closeted gay man in the first half of the 20th Century, from the teens to the 1960s actually. And he certainly was one of the daring few who were. But I have to admit, from the photo on the cover I was expecting to also discover that Jackson was "passing" as the expression had it in the first half of the 20th Century, when often fair skinned people with some African ancestry passed for "white" to avoid some of the worst aspects of racism. Turns out that wasn't the case, or at least Bailey doesn't address the possibility the cover seemed to me to fairly scream to be addressed.

Jackson was not always an admirable character, but he was deeply human in more openly honest ways than many of his contemporaries would ever allow themselves to be. His ambition and self aggrandizement, let alone self-indulgence, is often expressed in quotes from letters and other writing more blatantly than most would dare to expose these days. But it is difficult to tell with Jackson where he was being honest or where the alcohol or pills were talking. And Bailey doesn't help by referring often to Jackson's talks at meetings of Alcoholics Anonymous, as though Jackson were some kind of representative of that group when the whole point of the second word in that group's name is to avoid the kind of notoriety this biography brings to Jackson's failure to follow the tenets the group stands for.

But despite the repetitive highs and lows of what turns out to have been also undiagnosed bipolar disorder, as well as periods of drunkeness followed by periods of sobriety, and the illusion that Jackson can only write when popping pills, a dangerous assumption on Bailey's part based on not necessarily corroborated factual evidence but more on the kind of anecdotal evidence that contributes to the myth of creative people needing artificial stimulation to do their work, or alcoholics and addicts using it as an excuse for their drinking and drugging etc.—despite all that, the story is still fascinating, at least to me, how an upstate New York provincial closeted gay alcoholic became a world traveler (for treatment of his tuberculosis) before he became world famous (for THE LOST WEEKEND) before he became a figure in Hollywood and Manhattan celebrity culture, before he became a Liberace like Hotel Chelsea character...

Like I said, despite this biography's shortcomings I found it compelling. You might too.
Posted by Lally at 3:20 PM

1. I'm a fan of "Lost Weekend," Billy Wilder's movie based on Jackson's novel and I wouldn't be surprised if the two of them didn't always agree.

2. Several years ago the author Blake Bailey wrote a biography of another gay/closeted alcoholic writer, John Cheever. That was a vivid piece of work.

Yeah, and I see where he also wrote a bio of Richard Yates who I met many times at the U. of Iowa and in L.A. and who also was an alcoholic. Interesting choices.

Lal--For some chilling first-hand accounts of alcoholism and its effects, you can't do better than John Berryman's RECOVERY. It'sdamn near enough to scare you sober.
Bob B.