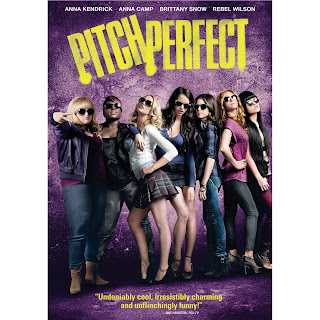 This is a minor flick in many ways, like a lot I stumble on when cable channel surfing as we used to do in pre-smart-everything times. But my older son had seen it and dug it, and my younger son was watching it when I came home yesterday, so when it popped up last night I watched it too, because they both had enjoyed it and been surprisingly satisfied by it.

It has a lot of obvious plot points familiar to college romantic comedies, with sometimes predictable twists and sometimes not (the Asian coed is so quiet you can't hear her, the model looking hottie is sexually promiscuous, etc.) but some good acting nonetheless within the limitations of the genre, including by the lead: Anna Kendrick (who was so amazing in the George Clooney flick UP IN THE AIR, or whatever it was called).

The set up is a competition between college acapella groups, like those TV singing and talent contest shows. Whether dubbed or not, the singing is not just good but at times so delightful it's inspiring, and along with the choreography and acting and sometimes clever comedy (sometimes not, like the seemingly obligatory puke scene in too many of these young adult comedies) kept me watching.

For a little escape from the roller coaster news lately, demonstrating how messed up some things are while others seem to be getting better, this flick fits the bill.
Posted by Lally at 4:12 PM