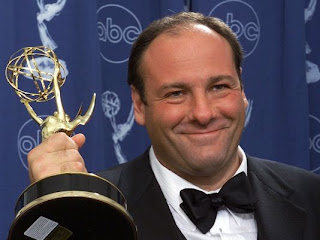 You probably already have heard that James Gandolfini died of a heart attack while in Italy. I don't have much to add, but to say the only time I spent with him was on a SAG picket line in Manhattan several years ago. We held signs and marched side by side for the length of a few blocks (though turning and coming back was half of it) and he was in that brief time, friendly, sweet, seemingly very happy (pretty much constantly smiling), just came off as a fellow worker not a star in the making which he was at the time.

Others have mentioned his range, though he will always be identified with his most famous character, Tony Soprano, and I too was impressed with the variety of types he could play. But my favorite role of his outside of Tony was Bear in GET SHORTY, a character in the bad guy vein though so different from Tony. That portrayal was when I first really noticed how good an actor Gandolfini was, and it was probably what caught the attention of David Chase as well and the team that cast him in THE SOPRANOS.

He was only 51, way too young for anyone to pass, especially when he had such a beautiful young family. His work will live on, but even those of us who only knew him peripherally will miss him. May his family find the consolation they need.
Posted by Lally at 9:56 AM