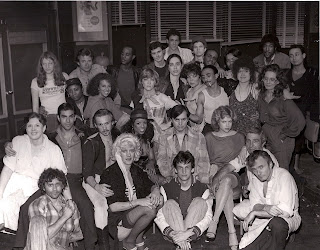 The cast of Lanford Wilson's "Balm in Gilead" in its premiere run in Los Angeles in 1983, many of whom are still good friends, but I'm posting it in remembrance of the late Jesse Aragon (who is basically in the middle of the photo, with Ty Jones making the horn symbol behind Jesse's head) who left us too soon, (five years after this shot was taken)

[PS: that's me in the white shirt and apron and still dark hair crouching down in the bottom right corner of the photo]