BEASTS OF NO NATION 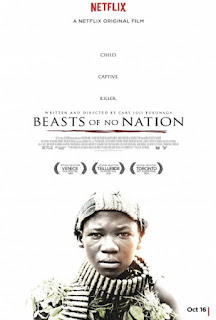 There's been a lot of noise about the lack of diversity once again in the Oscar nominations, and rightfully so.  For instance BEASTS OF NO NATION is one of the best movies of the last decade let alone year, with an (almost) entirely non-white cast, including a brilliantly impressive debut by boy actor Abraham Attah, and not one nomination.

So I'm proud of my union for nominating the cast for a "Best Ensemble" SAG Award as well as Idris Elba for a SAG "Supporting Role" Award. Not only should Elba have been nominated for an Oscar for a supporting role and Attah for a leading role, but the director and screenwriter, Cary Joji Fukunaga should have been nominated in both those categories as well.

My guess is not as many members of the Academy saw BEASTS OF NO NATION as should have, especially because it's a tough story (about Africa's child soldiers). But it is one of the most beautifully shot and incredibly well told stories on screen in 2015. It's easily the equal of THE REVENANT, which got the most Oscar nominations (and is also a great movie experience with a lot of violence, but not as challenging as BEASTS OF NO NATION).

I recommend BEASTS OF NO NATION to anyone who loves great movies (whether they're recognized by Oscar nominations or not).