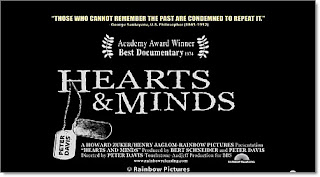 I rewatched this Oscar-winning documentary from 1974 last night on TCM and was moved and disturbed and saddened and engaged and enlightened all over again like the first time I saw it in a special screening at "the free clinic" in Washington DC not long after it came out.

Two things mainly struck me this time. The main one was the same as the main one to strike me the first time I saw it, even though this time I was prepared. And that was that the ex-POW who was shown being honored with a hometown parade and ceremony and later speaking to grade school children about war and still later to a room full of white women about their responsibility in preparing their sons for war when they are still in boyhood, I knew.

He had gone to the same boys school in Newark (Saint Benedict's Prep, a day school that prepared the sons of immigrants and working-class families, and in some cases of professionals, all identified by their ethnic origins, in my day mostly Italians and Irish, now mostly African-American, see the documentary on it called THE RULE) only a year or two behind me.

His perspective was one I had gotten in trouble for rebelling against in our school, and fourteen years after I graduated and a dozen after he had, here he was, one of the subjects of a documentary on the futility of the Viet Nam War and the ignorance and lies that had caused it and was still causing death and destruction when the film was made.

The other point that struck me this time was the distortions that the right propagated at the time that have now become accepted as historically accurate (just as the distortions about the Civil War have continued to in popular culture, i.e. the rebels were honorable and noble and etc. and the Union troops were drunken abusive outsiders in a genteel culture blah blah).

If you've never seen this extraordinary film, you should. And even if you have, you might want to watch it again for its relevance to the present, both politically and morally.
Posted by Lally at 1:38 PM