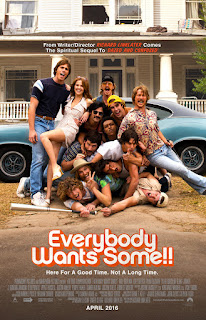 I wasn't that interested in seeing this movie after I saw the trailer, but then I heard director/writer Richard Linklater in a radio interview talk about how he meant it to be a spiritual experience and I remembered that I loved his movies—e.g. DAZED AND CONFUSED, BEFORE SUNRISE, BEFORE SUNSET, SCHOOL OF ROCK, and especially BOYHOOD—so I went to see it and was glad I did.

It's an ensemble piece with a group of young actors and actresses I'm mostly not familiar with but who all give great performances, with a few giving brilliant ones, in what seems at first a typical youthful comedy, but with only a few dick jokes and almost no bathroom humor, as opposed to most movies with young ensembles these days. Instead, it's actually about some deep stuff, including what it means to become your own person.

But it's not heavy in any way, though it is talky, like all Linklater's movies, too much so for some (I saw it at the nearby theater with the bulletin board and little forms you can write your opinion about, and grade, the movie you saw, and except for the friend I saw it with who gave it an A, the other grades were F's and one zero!), but not for me. I actually found myself laughing in the shower this morning thinking about one of the character's lines about being a good father (you'll have to look for it).

It's set in the Fall of 1980 and covers three days in the lives of college students, including some incoming freshman, just before classes start. It gets some things so perfectly right it feels like deja vu, and other stuff a little off but close enough to work. A period comedy that centers on male baseball scholarship students (and one female theater major) might come across as a little sexist, and it has its moments, but over all it's a great take on entering  a new arena where the competition is tougher but the rewards greater than anything you've experienced before.

Check it out and let me know what you think. And make sure you stay for the final credits, revelatory and well worth the wait.
Posted by Lally at 11:48 PM